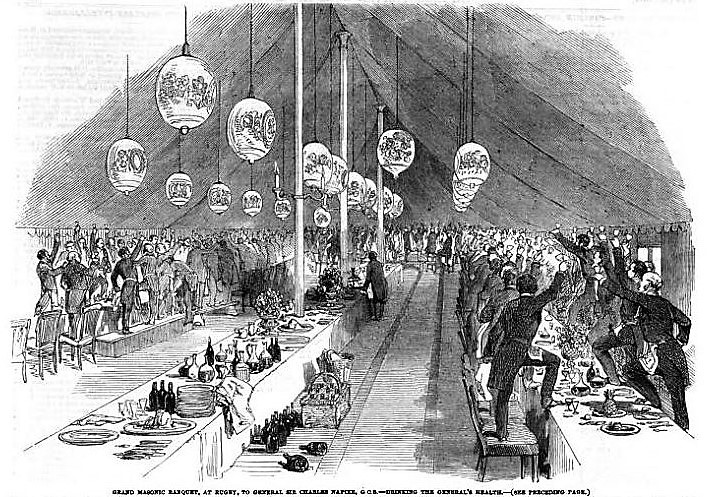 A beanfeast was originally an annual dinner given by employers to employees. For instance, The Gentleman’s Magazine and Historical Chronicle (London) of July 1793 reported the following:

Saturday July 13.
A fire broke out in the rope and yarn manufactory of Mr. Wilkinson, at Stepney Causeway. […] As no workmen had been in the manufactory during the whole day (Mr. Wilkinson having on that day given his men a bean-feast), there is every reason to suppose it was wilfully set on fire.

A beanfeast was also an annual dinner held by organisations or clubs. For example, this announcement was published in The Gloucester Journal (Gloucester, Gloucestershire) of Monday 24th July 1797:

MUSICAL SOCIETY.
PAINSWICK.
The Annual BEAN FEAST of this Society will be holden at the FALCON INN, Painswick, on Tuesday, August I, 1797.
Dinner on the Table precisely at Two o’clock.

These quotations do not explain why those feasts were so named. The following, from the Kentish Chronicle (Canterbury, Kent) of Tuesday 30th July 1805, may give the reason:

A BEAN FEAST.—A few days since, a Gentleman Tailor, celebrated for his liberality, gave a rich treat to his men, at his occasional country residence. It was called a Bean Feast; but, exclusive of the Beans, the table literally groaned with Bacon, Cabbage, Cucumbers, and, in short, every delicacy that he knew would suit the palates of his guests.

This seems to indicate that, although these celebratory dinners were named after the beans that were served, the fare was much more diverse and copious and included meat. This is confirmed by the following from The Surrey Comet (Kingston, Surrey) of Saturday 5th August 1865:

This yearly summer gathering of tradesmen and others was held on Wednesday at the George, Kingston-hill. Though called a “bean feast” it must not be supposed for a moment that that satisfying vegetable—the broad bean, and its usual accompanying dish of bacon—forms the staple article of consumption; but on the contrary the dinner is quite a feast of good things. The house is proverbial for its excellent dinners, and that of this year was no exception. A profusion of the best viands, and fine samples of wine were placed before the guests.

The following announcement appeared in The Norfolk Chronicle: or, The Norwich Gazette (Norwich, Norfolk) of Saturday 18th July 1778:

Litcham, July 15, 1778.
It being agreed to discontinue the annual BEAN FEAST, one of VENISON is instituted in its Place, which will be held at John King’s, at the Bull Inn, on Wednesday the 29th Instant.
PETER RAVEN, W. RODWELL. Stewards.
N. B. VENISON and MUSIC by the Stewards.
Dinner at Two o’Clock.

The word beanfeast was abbreviated to beano. The Era (London) of Saturday 1st September 1883 mentioned a music-hall song titled We don’t have a beano every day.

– Beano.—A slang abbreviation for “beanfeast,” which is, however, usually termed “goose” or wayzgoose by compositors.
– Goose.—Printers’ abbreviation for “wayzgoose,” or beanfeast.
– Wayzgoose.—The printer’s annual dinner.

The noun wayzgoose originally denoted an entertainment given by a master printer to his workmen around St Bartholomew’s Day (24th August), marking the beginning of the season of working by candlelight. It has come to denote an annual festivity held in summer by the members of a printing establishment, consisting of a dinner and, usually, an excursion into the country.

This noun is an alteration of the earlier waygoose, of same meaning. It has been suggested that a goose was the main dish served at such an event, but this cannot be substantiated, and it is unclear whether the second element of waygoose is to be identified with the bird.

It was the English lexicographer Nathan Bailey (died 1742) who, in order to provide an etymology, altered waygoose to wayzgoose after the noun wase, denoting a wisp or bundle of straw or reeds, in An Universal Etymological English Dictionary (London, 1731):

– Wayz, a Bundle of Straw.
– Wayz-Goose, a Stubble-Goose, an Entertainment given to Journeymen at the beginning of Winter.

But there is no evidence for the sense stubble-goose posited by Nathan Bailey.