Last week, in London, I had an opportunity to see some of the Volunteer Training Corps (the now famous “V.T.C.”) in action. This organization seems to consist of over-age run-of-mine¹ business men—solid-looking citizens, aged anywhere from 40 to 60, and has been formed as a sort of reserve defense in the unlikely event of England being invaded. They are not properly a part of the King’s Forces, but under The Hague Conventions, the vivid red brassard (which each wears on his left arm) entitles them to recognition as a belligerent; that is, they could not be summarily shot as civilian snipers. While their labors are appreciated (they drill every day, and pretty stiffly, too, under retired army drill sergeants), they are naturally the butt of many good-natured jokes from this flippant English people. For instance, their brassards bear the letters, G.R., meaning “Government Recognition.” But G.R. also means “Georgius Rex²,” so of course these perspiring, drilling citizens are known from Dover to Manchester as the “Gorgeous Wrecks.” Their troubles have been numerous. They were allowed to have regular army uniforms (purchased at their own expense), their pride in which grew dim when they discovered that when in uniform they would be required to stop, salute, stand at attention and say “sir” to any youthful subaltern just out of Sandringham who cared to stop them. This ceremony did not appeal to prominent city business men who were conscientiously doing hard work in preparation for a remotely possible contingency. Then the cruel government interdicted the wearing of these privately-purchased uniforms in any public restaurant or place of amusement. This was followed by shrill wails and copious threats of resignation (wholesale) from the long-suffering V.T.C.—but, so far as I know, none resigned. Altogether, there are now some 350,000 of these men drilling every evening all over England—to my mind a fine example to the young “shirkers” who hang around London and the various seaside resorts. As I say, I watched two platoons of them drill in Hyde Park, one evening last week; and they certainly did splendidly. It was worth while to see them go through the more intricate portions of platoon drill with very few mistakes, and stand quite silently under that scornful contempt of which only a competent drill sergeant is capable.

The following, from The Lichfield Mercury (Staffordshire) of 8th October 1915, confirms that the letters G.R. stood for Government Recognition and not, as often said, for Georgius Rex:

OUR MILITARY COLUMN.
VOLUNTEER DEFENCE CORPS.
An Appreciation.
[By Our Military Expert.]

“Getting Ready,” that is the real meaning of the big black letters which the Volunteer so prominently displays on his magnificently gorgeous “official” uniform—the brassard, that piece of ugly red flannel which he wears round his arm, and which always seems to suggest that he has recently been vaccinated. […]
Officially, of course, the letters on the flannel brassard have an altogether different significance to the one I have quoted; they indicate Government recognition, which, according to the tenets of International Law and the Rules of War will protect the wearer from the disagreeable experience of being hanged by an enemy to whom he has offered armed resistance. The letters on the badge are supposed to lift the Volunteer from the level of the civilian to that of a soldier, and give him the right to be shot nice and respectably, as it were.
Incidentally, however, they also give him the right to pay the same pleasant compliment to the enemy.

In Soldier and Sailor Words and Phrases (London, 1925), Edward Fraser and John Gibbons wrote, about the members of the Volunteer Training Corps:

One most useful work of theirs, which soldiers returning from the Front gratefully appreciated, was the meeting of leave trains at all hours of the day and night and piloting men across London to various railway centres for their homes in the country.

The earliest instance of Gorgeous Wrecks that I have found is in the caption to the following cartoon published in The Tatler (London) of 9th June 1915:

A MISUNDERSTANDING. By Alfred Leete. 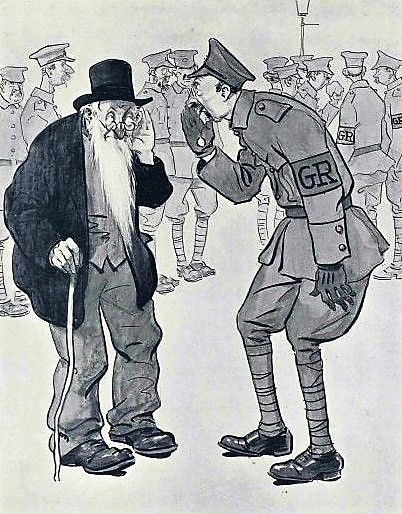 “I SAID IT MEANS GEORGIUS REX, NOT GORGEOUS WRECKS”

The only time men of the Volunteer Training Corps were faced with actual fighting was during the Easter Rising (24th-29th April 1916) in Dublin, Ireland. I have found an eyewitness account of this event in The Kildare Observer, and Eastern Counties’ Advertiser (Ireland) of 6th May 1916:

An old friend whom I met in Rathmines³ on Monday told me a tale which may be regarded as typical of many which the publication of the casualty lists of last week’s revolt will reveal. “I have a brother,” he said, ‘‘who is at present fighting in France with the Ulster Army; I am myself a member of the Veteran Corps, known in the city as the “Gorgeous Wrecks” (G.R.) and I am almost sure there is another brother fighting with the rebels.” He further told me the details of the attack on the “G.R’s.” or Veteran Corps in Northumberland Road on Easter Monday.
“Though I am a member of the Corps myself,” he said, “I refused to do route marches with them. The rifles they have are of an antique pattern. They have no ammunition to use with the rifles—there is not a bullet in Dublin that would fit them, and under these circumstances I refused as I say to invite attack parading useless, antedeluvian [sic] weapons. The G.R’s went for a route march on Monday. When the outbreak occurred I was sent to warn them, but they reached Northumberland Street at the same time as did. I was still some distance from the Corps when the rebels opened fire on them from the houses. Four were shot dead and fifteen were seriously wounded. There was, of course, no attempt at defence, and the members of the Corps who escaped took shelter anywhere they could get it. Four of them very pluckily attempted to attend to the wounds of their fallen comrades, and carried some of them to shelter while under fire.”

³ Rathmines: a suburb of Dublin