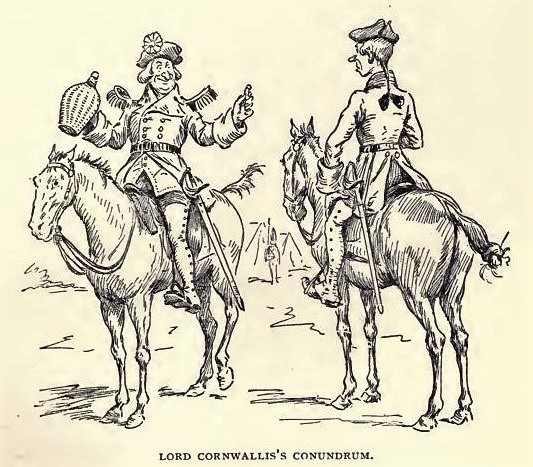 Lord Cornwallis once asked his aidy kong why the American poet always had such an air of listening as if for some expected sound. “I give it up,” retorted the aidy kong. “It is,” said Lord Cornwallis, as he took a large drink from a jug which he had tied to his saddle, “because he is trying to see if he cannot hear his bed-ticking.” On the following day he surrendered his army, and went home to spring his bon-mot on George III.

The word conundrum is first recorded in Haue with you to Saffron-walden. Or, Gabriell Harueys Hunt is vp (London, 1596), by the English pamphleteer Thomas Nashe (1567-circa 1601):

As the Elephant and the Rinoceros neuer fight but about the best pastures, so will I winne from him his best Patrons, and driue him to confesse himselfe a Conundrum, who now thinks he hath learning inough to proue the saluation of Lucifer.

In this passage, conundrum is used derogatorily, apparently in the sense of a person who promotes a perverse belief. As this use is found in this passage only, it is doubtful whether it is the original: it more probably stems from the use of conundrum in the sense of oddity, whimsy, either in speech or appearance, although first recorded a few years later, in Volpone; or, The Foxe (London, 1607), by the English poet and playwright Benjamin ‘Ben’ Jonson (1572-1637):

These are my fine conceipts!
I must be merry, with a mischiefe to me!
What a vile wretch was I, that could not beare
My fortune, soberly? I must ha’ my Crotchets!
And my Conundrums!

In chapter 5 of the first book of The Historie of Travaile into Virginia Britannia (1612), the English writer William Strachey (1572-1621), member of the Virginia Council, describes the attire and appearance of the Virginia Indians he has encountered:

Their eares they boare with wyde holes, comonly two or three, and in the same they doe hang chaines of stayned pearle braceletts, of white bone or shreeds of copper, beaten thinne and bright, and wound up hollowe, and with a greate pride, certaine fowles’ leggs, eagles, hawkes, turkeys, etc., with beasts’ clawes, beares, arrahacounes, squirrells, etc. The clawes thrust through they let hang upon the cheeke to the full view, and some of their men there be who will weare in these holes a small greene and yellow-couloured live snake, neere half a yard in length, which crawling and lapping himself about his neck oftentymes familiarly, he suffereth to kisse his lippes. Others weare a dead ratt tyed by the tayle, and such like conundrums.

The word later appeared in the sense of a play on words which sound alike but have different meanings in The Kingdom’s Weekly Post of 16th December 1645:

This is the man who would have his device alwayes in his sermons, which in Oxford they then called conundrums. For an instance […] all House is turned into an Alehouse, and a pair of dice is made a Paradice.

In A Declamation in Praise of Poverty, published in The Works of Mr. Thomas Brown, in Prose and Verse; Serious, Moral, and Comical (London, 1707), the English pamphleteer, satirist and translator Thomas Brown (1662-1704) establishes a relation between whimsy, the earlier sense of conundrum, and its later meaning, pun:

Pun, & Conundrum pass with them for Wit, and an Epigramatio piont [misprint for point?] is more charming than Horace or Virgil. They move indeed by meer Impulse and Whim, without any motive, or directions of Reason.

By the mid-18th century, conundrum had come to mean a riddle in the form of a question the answer to which involves a pun or play on words. For example, The Town and Country Magazine; or Universal Repository of Knowledge, Instruction, and Entertainment (London) of September 1769 published a letter from ‘Jeremy Joker’, who used the adjective conundromical:

Though I do not pretend to be one of your ingenious correspondents, I will venture to communicate to you the following answers to Mr. Wag’s conundrumical questions, printed in the last Magazine.

The August issue had published riddles to which ‘Walter Wag’ was hoping some of the magazine’s “ingenious correspondents” would answer; four of these questions were:

The answers given by ‘Jeremy Joker’ were:

If these replies prove not satisfactory to Mr. Walter Wag, he must even send a key to his conundrums with his own hand, “to prevent mistakes.”

In the above-mentioned text from 1645, conundrum is referred to as an Oxford term. Thomas Nashe and William Strachey were educated at the University of Cambridge. The latter was a friend of Ben Jonson’s, who studied at Westminster School. It is therefore possible that conundrum originated in some university or school joke or as a parody of some Latin scholastic phrase. This would account for forms of the word such as quonundrum and quadundrum used in the 17th and 18th centuries.

In Notes and Queries (London) of 5th February 1881, the British philologist Walter William Skeat (1835-1912) suggested that conundrum represents an alteration of Latin conandum, a thing to be attempted (neuter gerundive of the verb conor, to attempt); he writes that conandum

will give the double sense of problem or puzzle, and an invented story made to see how much people would believe.

The flaw that I see in this theory is that it does not account for the earlier meaning of conundrum, that is to say, whimsy, oddity.

In Conundrum—Quandary, published in The Journal of English and Germanic Philology (July 1943), the Austrian Romanist and Hispanist Leo Spitzer (1887-1960) suggested that conundrum is from an unattested French word calembourdon, itself an extended form of calembour, meaning a pun. But, apart from the fact that this does not account for the earlier sense of conundrum, the problem is that calembour is first recorded in 1768, whereas conundrum is attested in 1596.