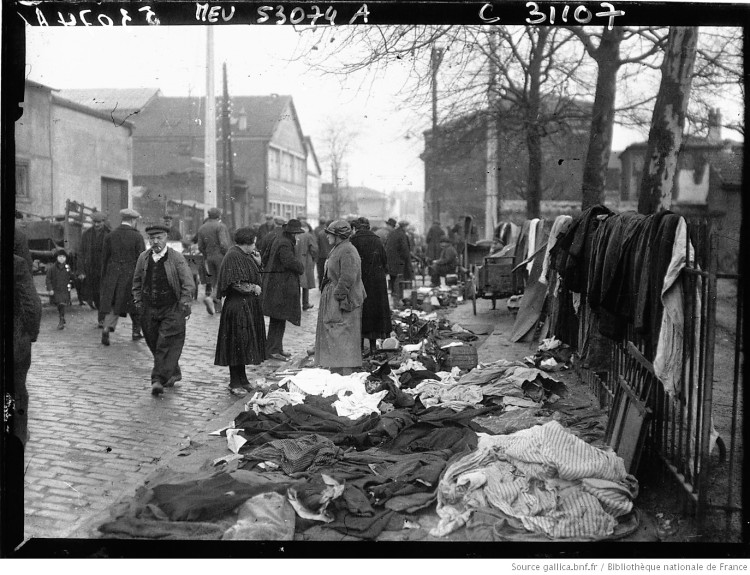 It is called the “Flea” Market because there are so many second hand articles sold of all kinds that they are believed to gather fleas.

According to the Mairie de Paris, the original flea market has existed since 1860. It is located Porte de Montreuil, named after a 19th-century gate which led to Montreuil, in the eastern suburbs of Paris. Henri Bonnet (1864-19..), secretary-treasurer of a welfare office in Paris, described this market in La Carte des pauvres à Paris (The Map of the Poor in Paris), published in the Revue des Deux Mondes (Paris, 15th September 1906):

I have found an early instance of flea market in The Yorkshire Evening Post of 27th July 1891:

There is going on just now near the Barrière de Montreuil, at the extreme east-end of Paris, a sale of rubbish, familiarly known to its frequenters by the unattractive name of the “Flea Market.” An old lady, Madame Pacaud, has had an extraordinary piece of good luck there. She bought a very old and dilapidated mattress, and on cutting it open with a view to having the horsehair cleaned she discovered a leather bag containing 14,000f. in gold. As the bedding is known to have passed through a large number of hands since it left those of its original possessor, it would be useless to attempt to find the rightful owner of the treasure, which will become therefore the legal property of the lucky old lady.

But the earliest instances of flea market that I have found are from The Sun (New York, N.Y.) of 29th May 1887:

Last Day of the Flea Market.
From a Copenhagen Letter.

Yesterday was the last day of the flea market. The fifty-two old women who have sat haggling over their uncanny wares in the square by the Government pawn shop until the queer band had become a part of the familiar physiognomy of the city, had been told that their time was up at 3 P.M. sharp, and that the flea market would then be a thing of the past. They had appealed in vain to the Mayor, to the Minister of the Interior, and, as a last resort, by deputation to the King, praying that in consideration of their great age they might keep their stands or move them elsewhere until they could drop out together, as it were. They were told that there was no room for sentiment in their case. Perhaps the fleas had killed it. Their mixed stock of second-hand clothes, old rags, felt shoes, and crockery certainly harbored a fair share. But, then, it was a very cheap market—so cheap that others than the very poor sought it for bargains. No matter; they must all go together. Customers had come from far and near to the closing sale until the square was black. So brisk a trade the flea market had never known. In spite of it more than one aged face was wet with bitter tears as the hands of the old tower clock pointed to 3 and the word to move on was given. There was very little left to move that was worth it; nothing more worn or shaky than the old market women themselves. As they flied [sic] out with their bundles, casting stolen glances behind them, one of the characteristic traditions of this old city went out with them and became a thing of the past.

I don’t know whether, in this article, flea market is the calque of French marché aux puces or a translation of Danish loppemarked (loppe meaning flea). According to the Danish dictionary Den Danske Ordbog, loppemarked is either from German Flohmarkt (Floh meaning flea) or from French marché aux puces. The origin of Flohmarkt is unclear according to the German dictionary Duden.