advertisement published in The Times (London) on 18th December 1800: 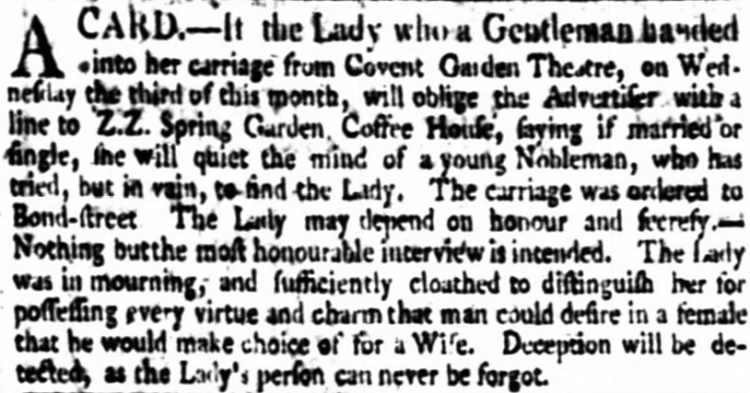 A CARD.—If the Lady who a Gentleman handed into her carriage from Covent Garden Theatre, on Wednesday, the third of this month, will oblige the Advertiser with a line to Z. Z., Spring Garden Coffee House, saying if married or single, she will quiet the mind of a young Nobleman, who has tried, but in vain, to find the Lady. The carriage was ordered to Bond Street. The Lady may depend on honour and secrecy. Nothing but the most honourable interview is intended. The Lady was in mourning, and sufficiently cloathed to distinguish her for possessing every virtue and charm that man could desire in a female that he would make choice of for a Wife. Deception will be detected, as the Lady’s person can never be forgot.

The term agony column denotes a regular newspaper or magazine feature containing readers’ questions about personal difficulties, with replies from the columnist; and agony aunt designates an editor, actually or supposedly female, of an agony column.

But agony column originally denoted a column in the The Times of London, later in other newspapers, which contained personal advertisements, especially for missing relatives or friends or for new relationships. It was thus defined in the Bristol Times of 3rd August 1861:

The Agony Column in the Times.—The top of the second column of the first page of the Times, is the place where the printers “pile agony.” Here we find the different letters of the alphabet addressing each other in terms of the most frantic grief or gentle reproach. A. B. is implored to return to his sorrowing T. T. X.X. wishes to meet L. M., not at Phillippi, but at 5 p.m. In a brief paragraph we catch a misfortune so profound as to check at once the laugh with which we greet the more vulgar and curious advertisements that surround it. I remember once reading a line to this effect:—“The assistance came too late—she died in the night.” Who was it that remains to reproach himself with his tardiness? The reader pauses for a moment, and wonders what tragedy lies hidden in this brief space.

The earliest mention of agony column, in The Durham Advertiser (County Durham) of 21st October 1853, was already sarcastic:

The “Agony” Column of the “Times.”—A correspondent under the signature of “Scrutatrix” and hailing from “Ultima Thule” writes to the Press as follows:—“A few weeks ago a correspondent of yours tore down the veil of mystery which lately invested certain advertisements in the Times. “He Blew” can blow no longer sub rosâ, and “Dearest A.” should by this time have lost all confidence in the ingenuity of “her own W.” Through your columns I would politely inform this interesting couple that, since the 1st of July, I have had the honour of being in their confidence; that I am quite aware that the birthday of one of them is the 11th of August; and that I have read all their communications, with much interest and very little trouble. I have sympathised with the fears of discovery which they have lately expressed, and I have looked anxiously for signs of improved sagacity in the “new cipher” which the mystic gentleman has recently promised, by means of the treacherous old one, to “Dearest A.” I am by no means disappointed in the enigma which the 1st of October has presented for my solution. “W.” is decidedly improved. It has now occurred to him to make one letter represent two different ones—s, for instance, being sometimes meant for d, sometimes for o; h and i both doing duty for t; while q represents b and e indifferently. The communication stands thus:
EAST!—Srs nst vqh bn aqhhqg qmeaprcrcv bn aphi rnewqc? V. E. rdbgh pes bn rpbeprve qesh iwtghspn. R wset nstg hrhiqg rh qqiiqg pes ipzxcv rpgq sa wqg hqau—Scqbsciw skqg pi aphi!!!—A. W.
—And its signification, not profoundly interesting to the general reader, is as follows:—“Did you get my letter explaining my last cipher? G. P. comes, and my campaign ends Thursday. I hope your sister is better and taking care of herself. One month over at last!” [He further declares that all ciphers constructed on this principle are legible to him, and suggests a sealed envelope to the penny post as a more satisfactory and less expensive way of carrying on a secret correspondence.]

authentic advertisement published in The Times on 1st November 1853:

The current sense of agony column, indissociable from the notion of agony aunt, was widespread in the mid-20th century, as the following from the Morpeth Herald (Northumberland) of 27th November 1953 illustrates:

A magazine “Away-from-Home Chat”, with Mrs. J. Turley (president) as editor and Mrs. J. Ormston as assistant editor, took place at the November meeting of Felton Women’s Institute.
[…]
The problem page and agony column of the magazine were contributed by Aunt Agatha (Mrs. Nichol), a rather forbidding figure, but with a gift for solving the most difficult and delicate problems of her correspondents, with the often amazed assistance of her secretary (Mrs. W. G. Clarke).

‘Sob, Sister’, a first novel by Irma Kurtz, is a little nervous at first but gathers pace well. The main character is Delia, an agony aunt (as is Irma Kurtz) who makes the mistake of visiting a pregnant Roman Catholic girl who has written to her for advice. The girl comes to live in her house and before long has managed to lure Delia’s painter boyfriend Paul (father of Delia’s child) away from her and into a conventional marriage. All Delia’s unconventional good sense is nullified by the power of the girl offering Paul the feminine, un-feminist temptations of praise and cooking and a home. There is a great deal of wisdom, anger and humour in this entertaining novel. I particularly liked her filing system for her agony letters: “Under Delia’s desk there were eight plastic boxes designed originally to contain builder’s tools. They were labelled: ‘Orgasms’, ‘Pregnancy; wanted and unwanted’, ‘Tits, noses, superfluous hair’, ‘Weight: over and under’, ‘lnfidelity’, ‘Depression and psychosis’, ‘Sex: Homo, trans and bi-’ and ‘Miscellaneous’.”

A variant of agony aunt, agony auntie, was used for example in this article from The Stage (London) of 15th March 1979:

Fresh, lively new comedy
It didn’t sound very promising. A new sitcom about the trials and tribulations of an agony auntie; written by a team one half of which consisted of a lady who is in the business herself. It seemed like a case of a Hamlet who wanted to play the clown and that could lead to disaster.
In fact it led to Agony (ITV, Sunday March 11, 9.15 pm) a new series from London Weekend by Len Richnond and Anna Raeburn which, if it can maintain the standard of its first episode, will make a fresh and lively contribution to Sunday night entertainment.

If Methodists in the Easington, Horden, Blackhall circuit have any problems they can send them to “Uncle Frank,” who will answer them in his “spiritual agony column.”
“Uncle Frank” is the Rev. F. B. Mitchell, of Horden, who is getting a steady stream of letters from Methodists in the area posing problems that are affecting their daily lives.
Mr Mitchell types out an answer and this he reads out during the “Letter Box” feature which is proving such a popular part of the “Saturday Night at Seven” meetings, held once a month in the Methodist Churches in the three villages.
“Agony columns’’
The “Letter Box” feature is based on the popular “agony columns” featured in many women’s magazines and Mr. Mitchell knows that most of the letter writers are among his audience, although he does not know their identity.
The letters are signed in the proper magazine fashion, with names like “Worried, Horden,” and “Miss Fortune.” Two others were signed “Bad Christian” and “Too timid to testify.”
Most letters are concerned with the application of Christianity to everyday life and a Christian’s attitude to such things as drink and gambling.
Mr. Mitchell thinks that most of the letters come from young people, but he has been able to detect that one or two come from older people with families. 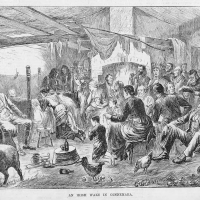