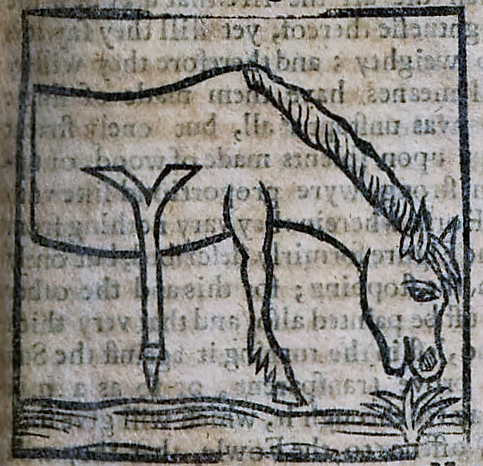 The forme and manner of the Stalking horse of Canuasse stopt. – from Hungers preuention: or, The whole arte of fowling by water and land Containing all the secrets belonging to that arte (1655 edition)

The term stalking horse originally denoted a horse trained to allow a fowler to conceal himself behind it or under its coverings in order to get within easy range of the game without alarming it. Its earliest known mention is found in the household and privy purse accounts of the Lestranges of Hunstanton for 1519-20 (eleventh year of Henry VIII’s reign):

It later came to also designate a portable screen of canvas or other light material, made in the figure of a horse, or sometimes of other animals, similarly used for concealment in pursuing game. The following is from the chapter titled Of the Stalking-Horse an other Engine, in Hungers preuention: or, The whole arte of fowling by water and land Containing all the secrets belonging to that arte (1621), by the English author Gervase Markham (circa 1568-1637):

The Stalking Horse […] is any old Iade [= jade] trayned vp for that vse, which being stript naked, and hauing nothing but a string about the neather chappe [= the lower jaw], of two or three yards longe, will gently and as you haue ocation to vrge him, walke vp and downe in the water which way you will haue him; flodding [= walking slowly?] and eating vpon the grasse or other stuffe that growes therein; and then being hardy & stoute without taking any affright at the report of the Peice [= ?], you shall shelter your selfe and your Peice behind his fore shoulder, bending your body downe low by his side, and keeping his body still full betweene you and the Fowle […].
Now forasmuch as these Stalking horses, or Horses to stalke withall, are not euer in readinesse, and at the best aske a good expence of time to bee brought to their best perfection: as also, in that euery poore man or other which taketh delight in this exercise, is either not master of a Horse, or if hee had one yet wanteth fit meanes to keepe him: and yet neuerthelesse this practise of Fowling must or should bee the greatest part of his mantenance.
In this case he may take any pieces of oulde Canuasse, and hauing made it in the shape or proportion of a Horse with the head bending downeward, as if hee grased, and stoping it with dry Strawe, Mosse, Flocks, or any other light matter, let it be painted as neere the colour of a Horse as you can deuise; of which the Browne is the best, and in the midst let it be fixt to a Staffe with a picke of Iron in it to sticke downe in the ground at your pleasure, and stand fast whilest you chuse your marke, as also to turne and winde any way you please, either for your aduantage of the winde, or for the better taking of your leuell, and it must be made so portable that you may beare it easily with one hand, moouing and wagging it in such wise that it may seeme to mooue and graze as it goeth; nether must this in any wise exceed the ordinary stature or proportion of a common Horse, for to bee too low or little will not couer the man, and to be two big and huge will be both monstrous & troublesome, and giue affright to the Fowle, therefore the meane in this is the best measure, and only worth the obseruation.

Very early, stalking horse came to be used in the figurative sense of a person or thing that is used to conceal someone’s real intentions. This is first recorded in The white diuel, or, The tragedy of Paulo Giordano Vrsini, Duke of Brachiano with the life and death of Vittoria Corombona the famous Venetian curtizan (1612), by the English playwright John Webster (circa 1580-circa 1625). Marcello speaks to his brother, Flamineo, who is the duke of Brachiano’s secretary; the duke has seduced their sister, Vittoria:

O my vnfortunate sister!
I would my daggers point had cleft her heart
When she first saw Brachiano: You ’tis said,
Were made his engine, and his stauking horse
To vndo my sister.

The term has also been used to denote an underhand means for making an attack or attaining some object, as in this passage from As You Like It (1599), by the English poet and playwright William Shakespeare (1564-1616); Jacques speaks to Touchstone, the court jester:

(Folio 1, 1623)
– Jacques: Can you nominate in order now, the degrees of
the lye.
– Touchstone: O sir, we quarrel in print, by the booke: as you
haue bookes for good manners: I will name you the de-
grees. The first, the Retort courteous: the second, the
Quip-modest: the third, the reply Churlish: the fourth,
the Reproofe valiant: the fift, the Counterchecke quar-
relsome: the sixt, the Lye with circumstance: the sea-
uenth, the Lye direct: all these you may auoyd, but the
Lye direct : and you may auoide that too, with an If. I
knew when seuen Iustices could not take vp a Quarrell,
but when the parties were met themselues, one of them
thought but of an If; as if you saide so, then I saide so:
and they shooke hands, and swore brothers. Your If, is
the onely peace-maker: much vertue in if.
– Jacques: Is not this a rare fellow my Lord? He’s as good
at any thing, and yet a foole.
– Duke Senior: He vses his folly like a stalking-horse, and vn-
der the presentation of that he shoots his wit.