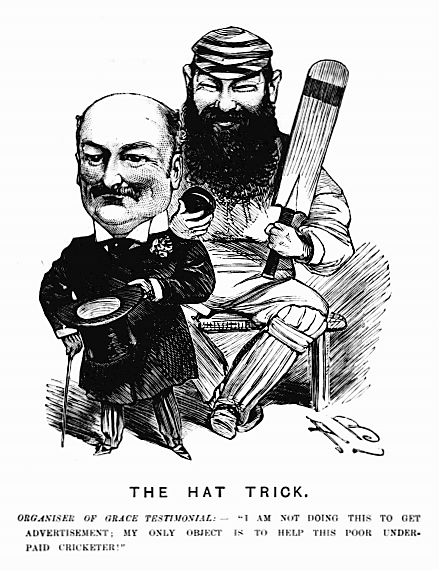 ORGANISER OF GRACE TESTIMONIAL: — “I AM NOT DOING THIS TO GET ADVERTISEMENT; MY ONLY OBJECT IS TO HELP THIS POOR UNDERPAID CRICKETER!”

The term hat trick denotes three successes of the same kind, especially consecutive ones within a limited period.

Specifically, in cricket, hat trick denotes the dismissal of three batsmen with three successive balls from the same bowler, a rare feat formerly rewarded by the gift of a hat from the bowler’s club. For example, the following is from The Leeds Times (Yorkshire) of 2nd March 1889:

BATES AND THE “HAT TRICK.”

In a match at Melbourne, in 1882, […] the Australians were batting, and Bates, the Yorkshireman, had just dismissed two of their best bats—M’Donnell and Giffin—in two consecutive balls. Bonner, who used to congratulate himself—and not without a certain amount of justification—that he could make mincemeat of our slow bowling, was the next man in. Somebody suggested that, in the faint hope of securing a ‘hat’ for Bates, we should try a silly mid-on. Bates faithfully promised to bowl a fast shortish ball between the legs and the wicket, and said he was quite certain Bonner would play slowly forward to it. Acting on the faith of this, W. W. Read boldly volunteered to stand silly mid-on for one ball. In came the giant, loud where the shouts of welcome from the larrikins’ throats; now would the ball soar over the green trees even higher than yonder flock of twittering parrots. As Bates began to walk to the wickets to bowl, nearer and nearer crept our brave mid-on; a slow forward stroke to a fast shortish leg-stump ball landed the ball fairly in his hands not more than six feet from the bat. The crowd would not believe it, and Bonner was simply thunderstruck at mid-on’s impertinence; but Bates had done the hat trick for all that, and what’s more he got a very smart silver tall hat for his pains.

Retaining its sense of threefold feat, the expression passed from cricket to other sports. The Yorkshire Post (Leeds, Yorkshire) of 18th August 1899 reported the following about a jockey named Otto Madden at the Stockton Summer Meeting:

In the Middlesbrough Welter Madden did the hat trick, for riding Sea Fog with the welter weight of 10st. 4lb. he got his third successive winner home. This is one of the horses that have been steered by Sloan, but the North Country backers were justly content to stand on Madden’s jockeyship.

The term hat trick has been used in other senses, for example in the 19th-century parliamentary milieu as reported in the Edinburgh Evening News (Edinburgh, Scotland) of 8th April 1886:

THE HAT TRICK IN PARLIAMENT.

The phase which the hat controversy entered upon in the House of Commons yesterday was evidently forced (remarks a London correspondent) by what is expected to take place to-day. The hon. member wanted the Speaker to express words of light and leading on the question, and begged of him to be more explicit on the point than he had hitherto been. He wanted it to be clearly and distinctly known whether a member was justified in monopolising a seat with an empty hat, when perhaps the head that belonged the hat might a mile or two away, or perhaps might not come back at all during the remainder of the sitting. To the uninitiated this suggestion would seem to imply that if a member secured his seat by placing his hat on it, and was suddenly called away on other business, he would go careering about the City or the West End without his hat. This assumption would be based on a popular delusion, and it is against the fallacy thus involved that Mr Henry is concentrating the whole force of his representative energies. Members are charged with the subterfuge of keeping two Parliamentary hats, one of which they use to keep the seats warm, and the other their heads. A hat seen lying on one the benches has hitherto been looked upon as a sacred thing, and anybody would as soon think of moving it or sitting upon it as they would of pulling the nose or sitting upon the member to whom it belonged. This is what used to be the case till Mr Henry took up that hat, and showed that there was nothing in it. Hats are left to take care of seats, and to imply a speedy return of their owners, in pretty much the same way as the barrister in chambers went on his holiday for a month, leaving on the door a ticket by which all clients were informed that he would be back in ten minutes. The ruling of the Speaker was by no means conclusive, and the chances are that at a very early hour this morning there will be a great many hats in possession while the owners are far away. Mr Macfarlane was one of those who was not quite satisfied with the Speaker’s ruling, and interrogated him more closely on the subject than Mr Henry had done. The manifest answer from the Chair was that the matter was one which concerned the strictly honourable conduct of the members themselves. An hon. member would be justified in placing his hat in a seat in order to secure it for prayers, but he would not be justified in leaving the hat there after prayers if he himself went wandering away from the precincts of the House. The member for Argyllshire shook his head incredulously. He was thinking of the two-hat trick; but this view of the case the Speaker judiciously ignored. All that can be said with certainty is that the ruling of the Speaker yesterday will not affect matters much to-day.

Dr. Tanner and Mr Mains arrived at the House of Commons early yesterday morning with nine hats, with which they secured all the seats upon the Front Opposition Bench below the gangway, thus ousting the Ulster members from the seats they had previously occupied.

Naturally, hat trick also denotes a trick in which a magician appears to produce an item from an empty hat. The Caledonian Mercury (Edinburgh, Scotland) of Thursday 6th July 1848 described one:

The Wizard of the North.—On Monday evening this celebrated master of arts and mysteries made his first appearance here these two years in his temple of magic, Waterloo Rooms, and has been since nightly performing, to the delight and bewilderment of crowded houses. His numerous feats of witchcraft and sleight of hand tricks baffle the keenest observer, while the incomprehensible changes and invisible passes which take place excite from all around the warmest exclamations of astonishment […]. The hat trick is one of the most wonderful, the magician drawing from a borrowed hat a whole garden of bouquets, which he liberally distributes among the spectators, fifty or sixty drinking cups, a lot of toys, flags, &c. and lastly feathers to about six times the bulk of the empty hat from whence they were drawn.