The phrase make hay means make good use of an opportunity while it lasts.

This is a shortening of make hay while the sun shines, recorded in A dialogue conteinyng the nomber in effect of all the prouerbes in the englishe tongue compacte in a matter concernyng two maner of mariages (1546), by the English playwright and epigrammatist John Heywood (1497?-1580?):

Whan the sonne shynth make hey, whiche is to saie,
Take tyme whan tyme cōmth, lest tyme stele awaie.
And one good lesson to this purpose I pyke [= pick]
From the smiths forge, whan thyron is hote stryke.

The English poet and playwright William Shakespeare (1564-1616) alluded to this proverb in The third part of Henry the Sixt, vvith the death of the Duke of Yorke (around 1591). Edward Plantagenet has just sent King Henry VI to the Tower and urges all speed in reaching Coventry to deal with the Earl of Warwick:

(Folio 1, 1623)
And Lords, towards Couentry bend we our course,
Where peremptorie Warwicke now remaines:
The Sunne shines hot, and if we vse delay,
Cold biting Winter marres our hop’d-for Hay.

The following illustration and explanations are from The Hand Book of illustrated Proverbs (New York, 1857), by John W. Barber: 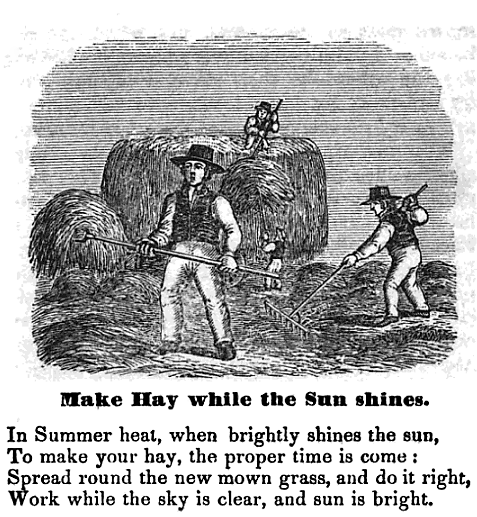 Make Hay while the Sun shines.

In Summer heat, when brightly shines the sun,
To make your hay, the proper time is come:
Spread round the new mown grass, and do it right,
Work while the sky is clear, and sun is bright.

This proverb, in its meaning, is somewhat similar to that “Strike while the iron is hot,” both implying that there are certain seasons, or times, in which certain things must be done, and if done to any good purpose, must be done at the proper time. The farmer, who wishes to make hay, watches the weather closely. Although clouds may obscure the sun, he may mow down the grass in his meadows to good advantage. But in order to make it into hay, he must have the warm, clear, and bright shining sun. He must, as is represented in the engraving, spread the new mown grass on the ground, and when one side becomes dry, he turns it over to have the hot sun dry the other—he then rakes it together, and transports it, by large loads, into his barn, or makes it into stacks secured from the weather.