Of American-English origin, the phrase outside the box means outside or beyond the realm of normal practice or conventional thinking.

It is chiefly used in to think outside the box, meaning to think creatively or in an unconventional manner.

refer to a puzzle consisting of nine dots arranged in the form of a square or box of three rows with three dots each. The challenge of the puzzle is to join all nine dots with four straight lines drawn without lifting the pencil from the paper. The puzzle can be solved only by extending three of the lines outside the box implied by the three-by-three arrangement of the dots. Most would-be puzzle solvers are foiled by the invisible limitations of the form.

Speaker Newt Gingrich 1, fond as ever of futuristic management consultant-speak, addressed the Ways and Means Committee last week on the importance of “thinking outside the dots.” This maxim is also often rendered as “thinking outside the box.” The idea is to encourage people to junk their preconceptions. If you want to change the way the world works, you often have to abandon your ideas about how the world works.

1 The U.S. politician Newton Leroy Gingrich (born McPherson, 1943) was the 50th Speaker of the United States House of Representatives from 1995 to 1999.

The dots and the box are related. A brain teaser used in 1984 by Development Dimensions International, management consultants, showed eight dots forming a square, or box, with a dot in the middle. “Without lifting your pencil from the paper,” the teaser went, “join all the dots with only four straight lines.” It looks like this: 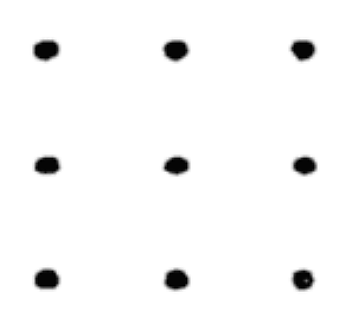 (I have tried to solve this and conclude that you have to be a liberal.) “To connect the dots,” wrote DDI’s Nancy Hrynkiw to Anne Soukhanov, an inquiring lexicographer, “you must go outside the nine dots, but most people automatically think that they have to stay within the nine dots.” (See page 22 for the way it’s done by visionary public servants and executives destined for the top or soon to be fired.)
Thus, thinking outside the dots or outside the box, Ms. Hrynkiw explains, means “thinking about a problem without the constraints that ‘how things are now’ sometimes imposes.” According to a list of current corporate catch phrases assembled in the Nov. 4, 1994, Management magazine, thinking out of the box can be defined as “creating new processes, not just refining old formulas.” The magazine adds, “However, challenging your bosses’ processes is risky.” 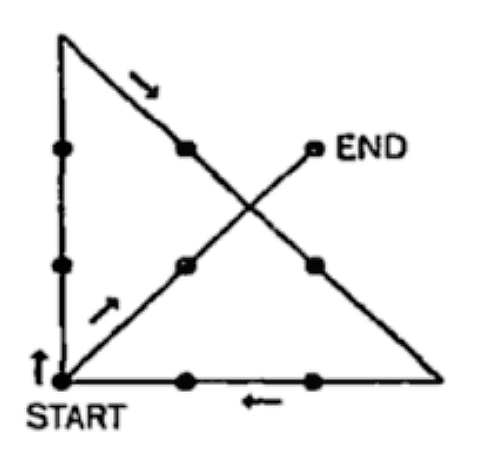 The following are three extracts from The art of creative thinking: How to be innovative and develop great ideas (London and Philadelphia: Kogan Page Limited, 2007), by the British author John Eric Adair (born 1934):

On a spare piece of paper draw a square of nine dots like this: 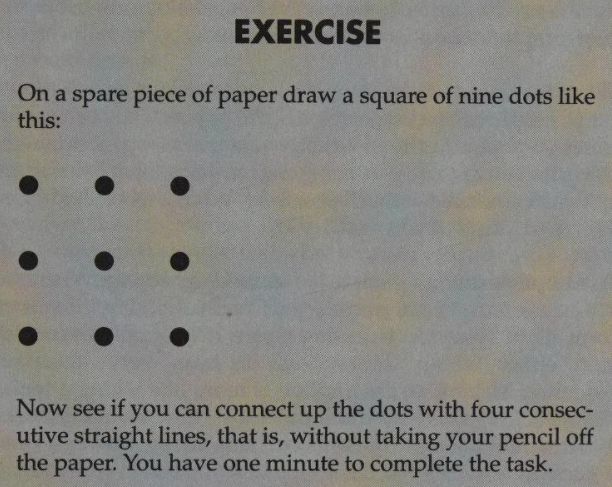 Now see if you can connect up the dots with four consecutive straight lines, that is, without taking your pencil off the paper. You have one minute to complete the task. 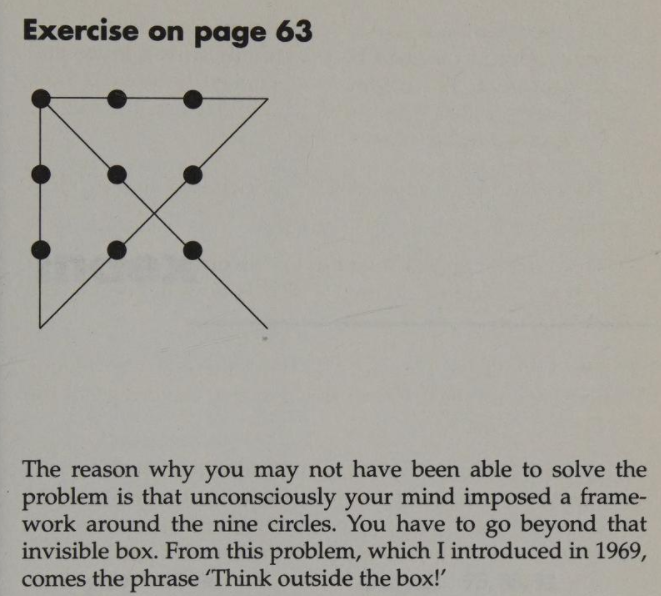 The reason why you may not have been able to solve the problem is that unconsciously your mind imposed a framework around the nine circles. You have to go beyond that invisible box. From this problem, which I introduced in 1969, comes the phrase “Think outside the box!”

Think outside the box! Don’t allow yourself to be constrained by the mental limitations or straitjackets that are sometimes imposed on situations without any warrant or truth.

An early phrase, to get outside the nine-dot square, occurs in the column Viewing TV, by Hal Humphrey, published in several U.S. newspapers on Friday 13th November 1959—for example in The Detroit Free Press (Detroit, Michigan):

I’ve been reading a new plan of action just initiated by one of our biggest advertising agencies. To protect the innocent, we will refer to this agency as Hoot, Holler & Howl. […]
In a lengthy communique to all of its divisions and affiliates, Hoot, Holler & Howl has informed them to stand by for “Operation Thrust.”
“Here’s how Operation Thrust will work,” reads the communique. “[…] Operation Thrust [is] a compressing of energy and time that will create a powerful, surging forward motion.”
Inspirational, isn’t it? Ah, but there is more. Next we have the two principal tools of Operation Thrust—“A philosophy of excellence” and “Breakthrough thinking.”
Now a philosophy of excellence is fairly self-explanatory, but some of you may not know what breakthrough thinking is exactly. Here is the Hoot, Holler & Howl definition!
“Breakthrough thinking is the fresh approach, the new concept, that gets outside the nine-dot square.”
I don’t know about the rest of you, but this has been my trouble all along. I’m forever getting hung up in a “nine-dot square.” There was one time when I got it down to eight dots, but then the damned thing turned into a circle.

The earliest occurrence of the phrase to think outside the dots that I have found is from the column Ottawa in Perspective, by Anthony Westell, published in The Ottawa Journal (Ottawa, Ontario) of Saturday 23rd May 1970:

The problem, says William Davd [sic] Hopper 3, is to think “outside the dots” about the questions of how to feed a hungry world.
He means that the need is to think imaginatively, creatively, about the development of less-developed countries, and not merely to keep pouring more money and technology into patterns of foreign aid established, not very successfully, over the past 20 years.

3 William David Hopper was, from 1970 to 1978, the President of the International Development Research Centre (IDRC), a Canadian federal Crown corporation.

The earliest recorded occurrence of to think outside the box is from Data Management (Data Processing Management Association) of September 1971—as quoted in the Oxford English Dictionary (3rd edition, March 2021):

Think outside the box. If you have kept your thinking process operating inside the lines and boxes [of organization charts], then you are normal and average, for that is the way your thinking has been programmed.

The earliest occurrence of to think outside the box that I have found is from the column People’s Doctor, by Robert Mendelsohn, M.D., published in several U.S. newspapers in March 1978—for example in The Times-Picayune (New Orleans, Louisiana) of Thursday the 23rd:

Some of my best teachers have been those who utilize the techniques of shock and surprise to rouse me out of conventional habits of thought forcing me to question accepted teaching and stimulating me to “think outside the box.”