The noun slobber-knocker denotes:
– an American-Football player with a particularly aggressive style of play;
– a match or contest that is particularly hard-fought or physically aggressive;
– a violent or severe blow, collision between players, etc.

The image is of knocking the slobber out of somebody—as illustrated by the text containing the earliest occurrence of slobber-knocker that I have found. This text also indicates that the noun was derived from the verb slobber-knock, meaning, of an American-Football player, to hit with extreme force. Titled Retread Rolls for OU, and published in The Dallas Morning News (Dallas, Texas) of Wednesday 11th October 1967, this text by Roy Edwards is about Don Pfrimmer, who was then a linebacker for the Oklahoma Sooners: 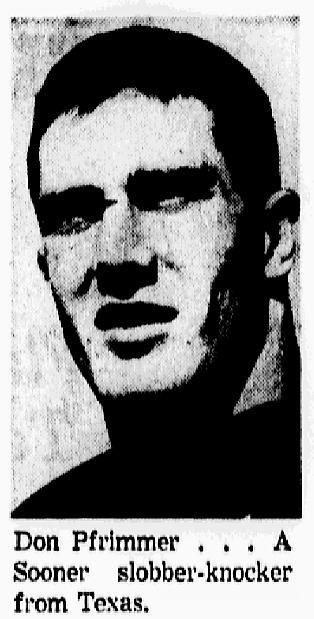 […]
“This kid has done a heckuva job for us,” Switzer 1 said, “He tackes [sic] like Wayne Harris (Arkansas all-American linebacker of the late 1950s). He hits ’em face up. He tackles with his nose. He wraps his arms around them and just tries to slobber-knock them.”
Slobber-knock them?
“That’s one of Wilson Matthews’ 2 (Arkansas assistant) expressions. When you hit ’em and they just get up slobbering, you’ve slobber-knocked them.”
SO ONE of the men to watch at the Cotton Bowl Saturday will be No. 43 for Oklahoma.
Don Pfrimmer is his name, and slobber-knocking is his game.

I have found an earlier occurrence of the verb slobber-knock in Few Imports, But Good Ones, by Orville Henry, Gazette Sports Editor, published in the Arkansas Gazette (Little Rock, Arkansas) of Thursday 5th March 1964—the American-Football player Dennis McClure had just been recruited by the University of Arkansas:

“DENNIS doesn’t wait for anything to come at him,” says Barry Switzer, who recruited him. “He gets to where that ball carrier is going, meets him head-on, and I’d say he slobber-knocks ’em.”

The word slobber-knock occurs as a noun denoting a game apparently similar to dodgeball in the following from Summer recreation program set by Sweeny School Board, published in The Brazosport Facts (Freeport, Texas) of Friday 21st April 1967:

The noun slobber-knocker then occurs as a name given to American-Football awards:

The Delaware Skull and Crossbones Awards are made each week to the defensive player who “made the big hit of the game” the previous week.
None were given after the Mud Hens hit The Citadel 48-12 on Saturday. “We call them slobber knockers,” head coach Tubby Raymond said of the award. In the victory over the Bulldogs, six Hens figured in the turnovers and got decals. “When you win a game like that you’d think we’d be throwing awards all over,” said Raymond. “But, we are not going to give them out until there is something outstanding.”

2-: In Beiber Adds an Emzee To His Slobberknocker, by Matt Zabitka, published in the Evening Journal (Wilmington, Delaware) of Tuesday 24th October 1978:

At Milford High, a Slobberknocker Award is given to players who make a super hit, one that’s so hard it knocks the slobber out of you.
“I got that (the Slobberknocker) from Mike Lude (an assistant coach) when I was at Delaware,” confessed Milford Coach Vern Walch, a running back on Coach Dave Nelson’s 1959 team that laced Temple 62-0 and finished 8-1, losing only to Bowling Green.
For hard hits in last Friday’s impressive 26-0 win over Dover, three players earned Slobberknocker Awards—outside linebacker Jeff Beiber, safety Gene Short (recipient of the most Slobberknockers this season) and inside linebacker Soph Darryl Hicks (his first).

The verb slobber-knock is characterised as a “new word” in Coach Gets Point Across Without Aid of Dictionary, published in The Tennessean (Nashville, Tennessee) of Monday 20th November 1978:

KNOXVILLE—Tennessee head coach John Majors, who often sends reporters scurrying to the dictionary after press conferences, came up with yet another new word yesterday.
While talking to a sportswriter here, Majors related some of the instructions he gave the Vols at halftime of the victory over Ole Miss. At one point he told the squad to “slobberknock” the Rebels.
Slobberknock, Coach?
“Yeh, slobberknock,” Majors said. “It means to knock the slobber out of somebody.”
Evidently, the Vols did their share of slobberknocking in the second half.