The noun calligram denotes a word or piece of text in which the design and layout of the letters creates a visual image related to the meaning of the words themselves.

This noun is a borrowing from French calligramme, which was coined by the French poet Guillaume Apollinaire (Wilhelm Apollinaris de Kostrowitzki – 1880-1918), who used it in the title of the collection of poems Calligrammes: Poèmes de la paix et de la guerre (1913-1916) 1 (Paris: Mercure de France, 1918).

The noun calligramme is from calli- 2 in calligraphie (calligraphy) and -gramme in idéogramme (ideogram) 3. In fact, according to Apollinaire: Œuvres poétiques (Paris: Gallimard, 1959), as quoted by the CNRTL (Centre National de Ressources Textuelles et Lexicales):

2 The combining form calli- is from Greek κάλλος (= kállos), meaning beauty.
3 The noun ideogram denotes a character symbolising the idea of a thing without indicating the sounds used to say it.

This is one of the calligrams from Apollinaire’s 1918 collection of poems; a detail from Cœur couronne et miroir (Heart crown and mirror), this calligram reads: 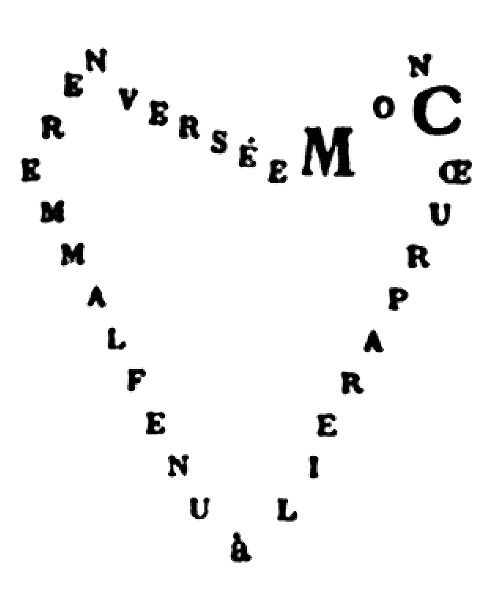 The following text and illustration are from Applied Art: Drawing, Painting, Design and Handicraft. Arranged for Self-Instruction of Teachers, Parents, and Students (Mountain View (California): Pacific Press Publishing Association, 1920), by the U.S. artist, art teacher and museum director Pedro Joseph Lemos (1882-1945)—here, however, calligram merely denotes a design in which the letters are rearranged so as to form a decorative pattern:

Calligrams are similar to monograms, with the exception that they contain the whole word instead of the initials alone. Calligrams were very popular among kings and nobles in medieval days. The letters in them were so planned as to make a pleasing design unit rather than to be easy to read. In the calligrams we have here, I am sure you would have no difficulty in making out the words.

Likewise, calligram merely denotes a design in which the letters are rearranged so as to form a decorative pattern in the following from Thought Pictures and Thought Forms, in Past Events Seership: A Study in Psychometry, by Gustav Pagenstecher, M.D., edited by Walter Franklin Prince, Ph.D., published in Proceedings of the American Society for Psychical Research (New York: American Society for Psychical Research, Inc.) for January 1922 (issued in June 1923)—in fact, the author is unsure whether to use calligram or monogram:

The very interesting experiment I shall submit to my readers in the following pages, will possibly give additional weight to the belief in the existence of “thought pictures,” and I therefore do not hesitate to publish the same in full, in spite of foreseeing that it will meet with much disbelief. Amicus Plato, sed magis amica veritas 4.
A lady friend of ours, who seemed to be particularly fond of my wife, had on several occasions shown us marked courtesy to such extent that it was thought fitting to reciprocate in some way her many civilities. A present in the form of a medallion bearing her name “Maria” in interwoven letters (so-called calligram or monogram) being thought of, the beautifully executed design of it met with her complete approval.
Shortly after chance (if there is such a thing, which I doubt) brought into my hands a slip of paper containing an uncharitable remark about a person dear to me, and spite of its not bearing any signature the suspicion flashed through my mind that the lady referred to above might have been the author of said uncalled-for criticism from pure levity.
The occasion to test my Medium’s faculty in that particular line was not to be overlooked, and in consequence I gave said piece of paper to my Medium with a request to report her vision with full details.
After giving a short description of the room the writer of the paper happened to be in, a most exact picture of the suspected lady was forthcoming, so that all doubt was absolutely excluded: the face, the dress, the coiffure, in fact an unmistakable portrait of the person was given.
Knowing the great fondness of all Mexican ladies for jewelry and recollecting the writer’s predilection for an odd looking heirloom which she used to wear almost daily, I hoped to obtain additional proof in the case, and ordered the Medium to describe any jewel she might see on the lady. She did not describe the heirloom referred to, but this is what she said:
“I see a luminous medallion pendent from her neck on a thin chain. It looks like a monogram with interwoven letters. In the center I see a large “M” with a large “I” crossing it. On both sides an “A”—now I catch it, it is the name “Maria.”
After having awakened the Medium I at once asked her to draw the calligram visualized. This was done in my presence without loss of time. I now refer my readers to the corresponding picture where they will find the two calligrams, one as designed by the jeweller and the other one as drawn by the Medium. That a surprising resemblance exists between the two drawings no one could deny; they are almost identical. 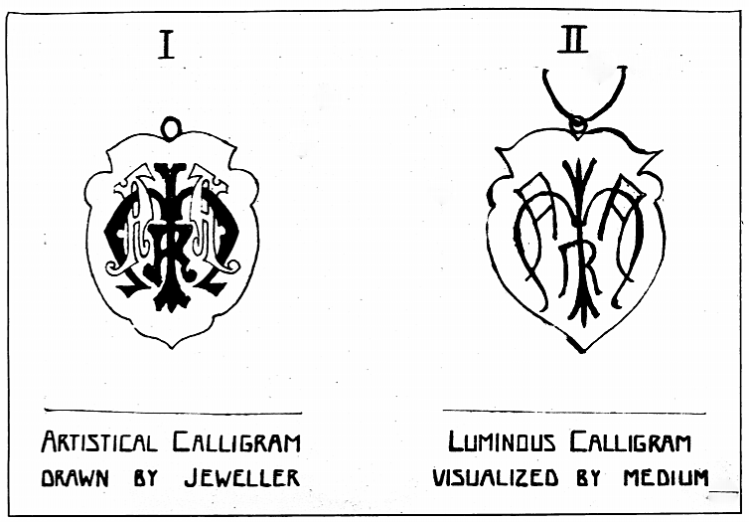 It must be emphatically stated that the Medium knew neither the lady in question, nor the story of the medallion gift.
And now comes the exceptional feature of this fundamental experiment […].
The medallion was never made.*
In consequence, the medium did visualize the “thought picture” of a non-existing jewel.
* But the drawing existed and we might suppose that it was clairvoyantly seen. Still, seeing the ornament around the neck of the lady, where it had never been, does suggest telepathy.—W. F. P.

4 The Latin phrase Amicus Plato, sed magis amica veritas translates as Plato is my friend, but truth is a better friend.