The phrase the pen is mightier than the sword means that writing is more effective than military power or violence.

Because the earliest occurrence of this phrase that the Oxford English Dictionary has recorded since its first edition (1904) is from Richelieu; or, The Conspiracy: A Play, in Five Acts (London: Saunders and Otley, 1839), the pen is mightier than the sword is usually ascribed to the author of this play, the English author and politician Edward George Earle Lytton Bulwer-Lytton (1803-1873)—this is the relevant passage, from a dialogue between Armand Jean du Plessis (1585-1642), Duc de Richelieu, and his page, François:

Reach me yon falchion, François,—not that bauble
For carpet-warriors,—yonder—such a blade
As old Charles Martel might have wielded when
He drove the Saracen from France.
(François brings him one of the long two-handed swords worn in the Middle Ages.)
With this
I, at Rochelle, did hand to hand engage
The stalwart Englisher,—no mongrels, boy,
Those island mastiffs,—mark the notch—a deep one—
His casque made here,—I shore him to the waist!
A toy—a feather—then!
(Tries to wield, and lets it fall.)
You see a child could
Slay Richelieu, now.
François (his hand on his hilt).
But now, at your command
Are other weapons, my good Lord.
Richelieu (who has seated himself as to write, lifts the pen).
True,—THIS!
Beneath the rule of men entirely great
The pen is mightier than the sword. Behold
The arch-enchanter’s wand!—itself a nothing!—
But taking sorcery from the master-hand
To paralyse the Cæsars—and to strike
The loud earth breathless!—Take away the sword—
States can be saved without it!

However, I think that E. Bulwer-Lytton did not coin the pen is mightier than the sword, since I have found an earlier occurrence of the phrase in the following from The Northern Whig (Belfast, Antrim, Ireland) of Monday 23rd April 1832—The Northern Whig was quoting The Courier, i.e., probably, the London newspaper originally titled The Courier and Evening Gazette:

Polish Literary Association.—We are glad to learn, that a Society has been formed in London for the promotion of Polish interests, under the title of “The Polish Literary Association.” The members already elected on the Council, are persons distinguished by rank, wealth, and intellect, but still more by the noble part which they have acted in support of a people reduced, but not humbled—subdued, but not degraded—by the Russian arms!—Great good may arise out of this Association. The pen is mightier than the sword. The sword can destroy, but it cannot create. The pen can do both—it can shame the despoiler, and prepare the means of effectual resistance to tyranny and fraud—it can rouse the sympathies of a people, and wake the dormant energies of the Minister who is not entirely lost to ideas of right.

In any case, E. Bulwer-Lytton certainly popularised the phrase—as illustrated by this extract from a letter by a person signing themself ‘A Middle Class Chartist’ 1, published in The Charter (London, England) of Sunday 22nd December 1839:

Englishmen! […] By upholding the Penny Satirist, you are upholding an enemy who every week brandishes his weapon (“the pen is mightier than the sword.” Bulwer) against you.

1 Named after a manifesto called The People’s Charter (published on 8th May 1838), Chartism (1837-48) was a parliamentary reform movement in the United Kingdom, calling for universal suffrage for men, equal electoral districts, voting by secret ballot, abolition of property qualifications for MPs, and annual general elections.

Likewise, on Saturday 15th August 1840, The Northern Liberator and Champion (Newcastle upon Tyne, Northumberland, England), another Chartist newspaper, quoted E. Bulwer-Lytton’s use of the phrase in an article about the resolution, carried unanimously at a meeting of the Sunderland Chartists, “that immediate steps be taken to incorporate the Durham County Charter Association into the National Association”:

It is earnestly requested that every honest Chartist, will take immediately the opportunity of enrolling his name in this National Association. It is requested that honest men alone enter the ranks, and not those who love to brag of being advocates of the dagger and torch, and lose heart if their object is not at once gained by such means. Let us have those only who are willing to toil and work for years peaceably, legally, and constitutionally; men who see sufficient in the moral and intellectual energies of the people, by which their rights may be obtained, and their every object accomplished; men who see the truth of Bulwer’s Richelieu, that “the pen is mightier than the sword.”

The phrase occurs in an often-reprinted short text, attributed to the Scottish historian and political philosopher Thomas Carlyle (1795-1881). The earliest occurrence that I have found of this text, entitled Influences of Literature and War, is from The Philadelphia Gazette, and Commercial Intelligencer (Philadelphia, Pennsylvania) of Wednesday 17th November 1841—“the Poet” may refer to E. Bulwer-Lytton:

The power of the sword perishes with the arm that wields it, but a good book lives and works forever. Well said the Poet who felt its truth, “the pen is mightier than the sword.”

This advertisement was published in The Leicestershire Mercury (Leicester, Leicestershire, England) of Saturday 20th August 1842: 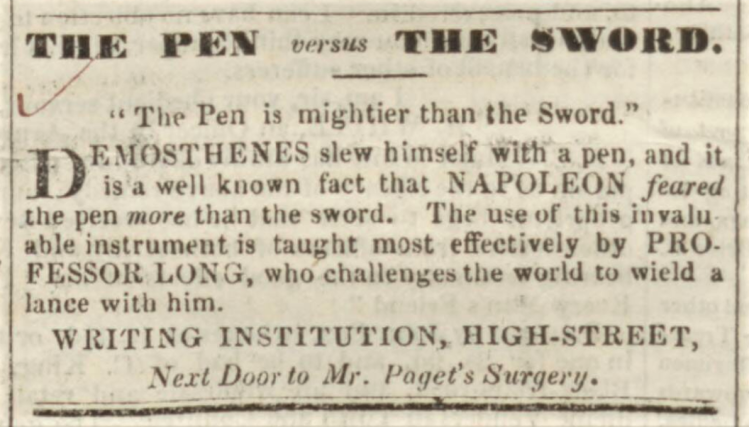 THE PEN versus THE SWORD.
“The Pen is mightier than the Sword.”

DEMOSTHENES slew himself with a pen 2, and it is a well known fact that NAPOLEON feared the pen more than the sword. The use of this invaluable instrument is taught most effectively by PROFESSOR LONG, who challenges the world to wield a lance with him.

2 According to the Greek biographer and philosopher Plutarch (c.46-c.120) in Parallel Lives, the Athenian orator and statesman Demosthenes (384-322 BC) committed suicide by taking poison out of a reed, pretending he wanted to write a letter to his family.