This phrase originated as the involuntary alteration by a blundering narrator of must you go? can’t you stay? in Chapter XXVII of Collections and Recollections. By One who has Kept a Diary, by the British politician and author George William Erskine Russell (1853-1919)—as first published in The Manchester Guardian (Manchester, Lancashire, England) of Saturday 17th July 1897; the following passage is about “the faculty of boring”:

I once was talking with an eminent publicist about the characteristic qualities produced by various public schools, and when I asked him what Harrow produced he replied, “A certain shy bumptiousness.” It was a judgment which wrung my Harrovian withers, but of which I could not dispute the truth. One of the forms which shyness takes in boyhood is an inability to get up and go. When Dr. Vaughan 1 was Head Master of Harrow and had to entertain his boys at breakfast, this inability was frequently manifested, and was met by the Doctor in a most characteristic fashion. When the muffins and sausages had been devoured, the perfunctory inquiries about the health of “your people” made and answered, and all permissible school topics discussed, there used to ensue a horrid silence, while “Dr. Blimber’s 2 young friends” sat tightly glued to their chairs. Then the Doctor would approach with cat-like softness, and, extending his hand to the shyest and most loutish boy, would say, “Must you go? Can’t you stay?” And the party broke up with magical celerity. Such at least was our Harrovian tradition.
Nothing is so refreshing to a jaded sense of humour as to be the recipient of one of your own stories retold you with appreciative fervour but with all the point left out. This was my experience not long ago with reference to the story of Dr. Vaughan and his boy-bores which I have just related. A Dissenting minister was telling me, with extreme satisfaction, that he had a son at Trinity College, Cambridge. He went on to praise the master, Dr. Butler 3, whom he extolled to the skies, winding up his eulogy with, “He has such wonderful tact in dealing with shy undergraduates.” I began to scent my old story from afar, but held my peace and awaited results. “You know,” he continued, “that young men are sometimes a little awkward about making a move and going away when a party is over. Well, when Dr. Butler has undergraduates to breakfast, if they linger inconveniently long when he wants to be busy, he has such a happy knack of getting rid of them. It is so tactful, so like him. He goes up to one of them and says, ‘Can’t you go? Must you stay?’ and they are off immediately.” “So,” as Macaulay 4 says of Montgomery’s 5 literary thefts, “may such ill-got gains ever prosper.”

Interestingly, on Monday 19th July 1897, The Bradford Daily Telegraph (Bradford, Yorkshire, England) reprinted the second paragraph only of the above-quoted text—but without even mentioning the author, and with one alteration: the “dissenting minister” was talking, not with George W. E. Russell, but with “a well-known publicist”:

Nothing is so refreshing to a jaded sense of humour as to be the recipient of one of your own stories retold you with appreciative fervour, but with all the point left out. This was a well-known publicist’s experience not long ago. A Dissenting Minister was telling him, with extreme satisfaction, that he had a son at Trinity College, Cambridge. [&c.]

Also interesting is the fact that, in Chapter XXIV (instead of the original Chapter XXVII) of Collections and Recollections. By One who has Kept a Diary (London: Smith, Elder, & Co., 1898), the “eminent publicist” whom George W. E. Russell was originally talking with became “an eminent educationist”:

I once was talking with an eminent educationist about the characteristic qualities produced by various Public Schools, [&c.]

Both the anecdotes first told by George W. E. Russell rapidly became popular—as illustrated by Brown’s Successful Story. It Came Out in an Unexpected Way, but It Illustrated a Point Graphically, published in The Sun (New York City, N.Y.) of Sunday 13th November 1898:

The poker game which had started in the baggage car at Port Chester was running along smoothly when the Mount Vernon man came in and seated himself where he could overlook Brown’s hands. Ever since Saw Pits became Port Chester the Browns had been summer residents there, and by virtue of this fact young Brown assumed for himself certain privileges along the line which no self-respecting commuter ever questioned. […]
[…]
[…] Just as the train reached the tunnel Brown said […]:
“I heard a good story last night about a man who was head master of St. Anthony’s School years ago and a minister who never could tell a story without missing the point. This headmaster was a man with much tact in his dealings with the boys, and on occasions when he invited them to dine with him he had a graceful way of dismissing them. Boys, you know, are awkward, and they find it difficult to leave occasionally. This head master would say to the largest boy when he wanted to dismiss them:
“‘Must you go now? Can’t you stay?’ And the boy would, of course, insist that he had to go, and”—
“Hold on there,” said the Mount Vernon man. “Why don’t you tell that straight? It was the headmaster of an English school who did that, and not the head master of St. Anthony’s. I was at St. Anthony’s myself, and I know.”
Brown gasped in astonishment at this interruption, but the Mount Vernon man’s statement that he had been at St. Anthony’s upset him, and he continued:
“Well, perhaps it was an English school, but that has nothing to do with the story. I will take three cards. Thank you. To continue. A somewhat blundering minister who thought this was a good story”—
“Hold on there,” interrupted the Mount Vernon man, “tell it straight while you are about it. It wasn’t a minister at all. It was a member of Parliament and I knew him.”
This staggered Brown, and it also angered him.
“Member of Parliament then, if you insist, but that isn’t the point of the story,” he said with contempt. “This-er-er-this member of Parliament never could get a story straight, and”—
“There are others,” said the Mount Vernon man, as he re-lighted his pipe.
“And so,” continued Brown, as if he had not heard the interruption, “when, at a dinner party, this head master’s name came up, he started to tell this illustration of his tact, he said: ‘When he wanted the boys to go he would say to the largest one, “Must you go? Can’t you stay?”’”
No one laughed.
“Must you go? Can’t you stay?” repeated Brown, expectantly.
“Hold, there,” said the Mount Vernon man. “You have missed the point yourself. He said, that is the member of Parliament who never got things straight: he said that the head master displayed his tact by saying, ‘Can’t you go? must you stay?’ That’s the point of the whole story, d’ye see? ‘Can’t you go? Must you stay?’ That’s it. Tell it straight or don’t.”
The baggageman had thrown open the door of the car, which by this time had stopped in the depot, and he says that the subsequent events happened so rapidly that they seemed to be simultaneous. Brown’s eyes blazed, according to the other witnesses. No one knew just what was happening until he saw the Mount Vernon man flying through the side door of the baggage car as if he had wings. As he landed in a confused heap on the platform Brown said (according to the train boy he hissed it through his teeth):
“Must you go? Can’t you stay?”
“Served him right for an intruder,” was the verdict of the Commuters’ Poker Club, and to their great regret Brown hasn’t attempted to tell a story since.

The earliest occurrence that I have found of the phrase used without explicit mention of its origin is from The Detroit Free Press (Detroit, Michigan) of Thursday 29th June 1899:

[An evening newspaper] dwelt at great length upon the toil and trouble and the ill-temper and inconvenience that are in store for Detroit because some 30,000 or 40,000 Christian pilgrims and strangers will come into our gates with gladness and a song next week. The paper concluded this exceedingly rapturous survey of the prospect with the statement that a great trial of the Christian patience and fortitude of the community was at hand.
All of which savors of that spirit of pious hospitality and saintly grace and courtesy that impelled the good deacon to pray at the morning meal for a blessing upon the visiting brother “who is to leave us on the 9:33 train this morning;” and that moved that other more strategic host to exclaim to his guests, “Can’t you go? Must you stay?”

The phrase occurs in the caption to this cartoon by the English artist, illustrator and cartoonist Leonard Raven-Hill (1867-1942), published in Punch, or the London Charivari (London, England) of Wednesday 18th January 1905, and referring to the prolonged stay of the Russian Admiral Zinovy Petrovich Rozhestvensky (1848-1909) at Madagascar during the Russo-Japanese War of 1904-05: 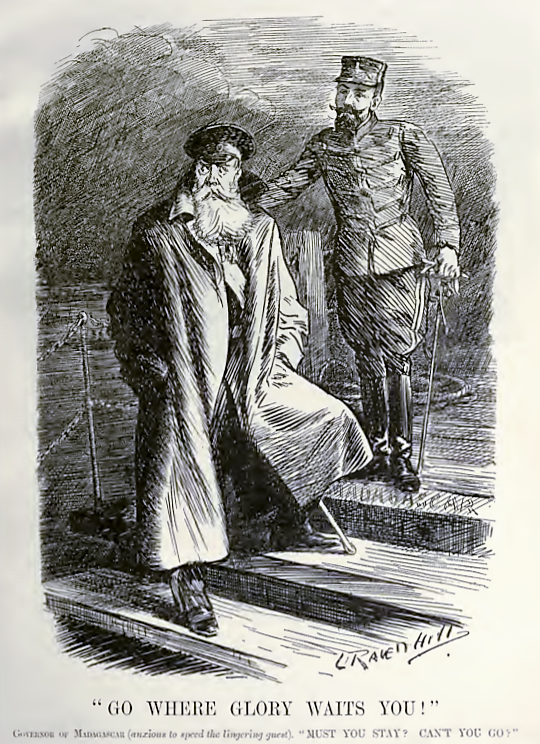 “GO WHERE GLORY WAITS YOU!”

Governor of Madagascar (anxious to speed the lingering guest). “MUST YOU STAY? CAN’T YOU GO?”

The phrase is now more broadly used than with reference to a host or hostess who wants to speed up the departure of his or her guest(s). It seems to be used in particular of a person whom the speaker regards as unfit for office.

For example, published in the Ashbury Park Press (Ashbury Park, New Jersey) of Tuesday 2nd April 1991, an article dismissing the planned comeback of Geraldine Ferraro, the Democratic vice-presidential candidate who lost with Walter Mondale in 1984, was titled:

Must you stay on? Can’t you just go?

Likewise, the following is from a letter published in The Montana Standard (Butte, Montana) of Sunday 3rd November 2019—Roger Koopman, a Montana Public Service Commissioner, had declared that “rapid human caused climate change is worldwide hogwash”:

Mr. Koopman, your Republican Party has embraced an orthodoxy that rejects the basic responsibility for promoting a clean and healthful environment.
So, if your party has one scientiﬁc investigator who has results that are veriﬁable proving that man-made climate change is “hogwash,” tell us who he or she is. Words matter. If not, must you stay? Can’t you go?