The informal British-English phrase to box clever means to conduct oneself adroitly. Here, clever is an adverb meaning skilfully.

This phrase originated in boxing—as in the following, from the account of a boxing match between Johnny Thompson and Rudolf Unholz, published in The Sporting Life (London, England) of Tuesday 20th December 1910:

In the third [round] Rudie made the best showing of the contest. He boxed “clever,” and kept jabbing his left into Johnny’s face and switching again to the body.

The earliest occurrence that I have found of to box clever used figuratively is from the account of a hearing at the Marylebone Police Court, London, published in the West London Observer (London, England) of Friday 20th September 1935:

Harry Harvey (28), bookmaker, of Hanbury Street, Spitalfields, […] was charged on a warrant with loitering for the purpose of betting in Henry Street, St. John’s Wood […].
[…]
The magistrate then asked him about his statement to the police when arrested on the warrant, in which he was alleged to have said, “I may as well be hung for a sheep as a lamb. When I saw you I thought the best thing to do was to get out of it. You have given us a rough time lately, not letting us work. Our expenses are heavy and they still go on even when we cannot work. We have to box clever. When you are about we aren’t and when you are not, we take a few.”

The second-earliest occurrence that I have found of to box clever used figuratively is from The Gilt Kid (London: Jonathan Cape, 1936), a novel set in London, particularly in the underworld of Soho, by the British author James Curtis (Geoffrey Basil Maiden – 1907-1977)—interestingly, the phrase occurs among allusions to fist-fighting:

The old man was walking across the floor. The Gilt Kid clenched his fists the tighter. The more a fist is clenched the harder a blow feels in a bare-knuckle fight.
If the queer fellow tried to come any acid he would get hit right on the razzo [= nose]. […]
The man was standing near the Gilt Kid’s table and was speaking. The Gilt Kid got ready to swing up his right. His eyes measured the distance to the other’s chin.
‘You’re Mr Kennedy, aren’t you?’
‘So what?’ He did not get up or anything. ‘What are you going to do about it?’
The old man smiled. He did not understand the way the conversation was running. His voice was affable.
[…]
‘Won’t you come over and join us? We should be delighted. My name is Bedborough. Francis Bedborough.’
The Gilt Kid rose. He smiled. He was not quite sure what to do. He knew, however, that he would have to box clever. This might be a trap of some sort.

Capitalist and Communist newspapers are often comrades when they are concerned with their advertising columns. The Daily Worker recently has persuaded one or two large firms—which, apparently, do not mind feeding the agencies which work for their destruction—to take advertising space, and very jubilant the Communist sheet is about it. Lenin 1 must be turning in his grave, and I hate to think what Stalin’s 2 response will be. Of course, he might “box clever” and excuse this lapse into heresy by the argument that it is all to the good that capitalist enterprises should commit hara-kiri.

The above-mentioned British author James Curtis used to box clever again in A Bit of Bad, a short story published in The Bystander (London, England) of Wednesday 15th March 1939—“strike a light” is a mild imprecation:

The Gilt Kid […] put him [= the old printer] to work on making pound notes. And, boy, could the old feller make it good? I ain’t a-kidding to you. That’s exactly what he did. And the Gilt Kid boxed clever. Yes, son, the Gilt Kid boxed clever. He knew he was on to a real good thing and acted wide. He’s got the old boy grafting away for a month, practising and practising until he’s got it off good.
“’Blige me,” said the Gilt Kid at last. “Caw, strike a light. You can’t tell them apart. Straight up you can’t. May I be topped.”
And there he was, standing there holding a bad ’un and a real pound note straight from the Bank of England. The old geezer, grinning all over his pan like a dog that’s been patted on the nut, come out with a stroke.
“What we going to do? Let’s go up to the pub at the top of the street and have one. We can smash one of these new ’uns.”
You want to see the Gilt Kid rort [= shout]. He didn’t half say a few words.
“Blimey,” he’s turned round and said, “blimey. Strike a light. Don’t you never let me hear you talking soft like that again,” he’s said, “or I’ll break your bleeding neck,” he’s said. “You want to use your loaf,” he’s said. “All you got to do is to make the stuff. I’ll take care of all the thinking and do all the suggesting without any advice from an old fool like you. Change a note at the boozer. Caw, a kid going to school’d know better than to talk as wet as that. Change a note at the boozer. Caw. If you wasn’t so handy as a penman I’d give you a good doing I would. So help me God, I would.”
So the Gilt Kid’s used his nut and boxed clever.

illustration by Alex Jardine for A Bit of Bad—from The Bystander (London, England) of Wednesday 15th March 1939: 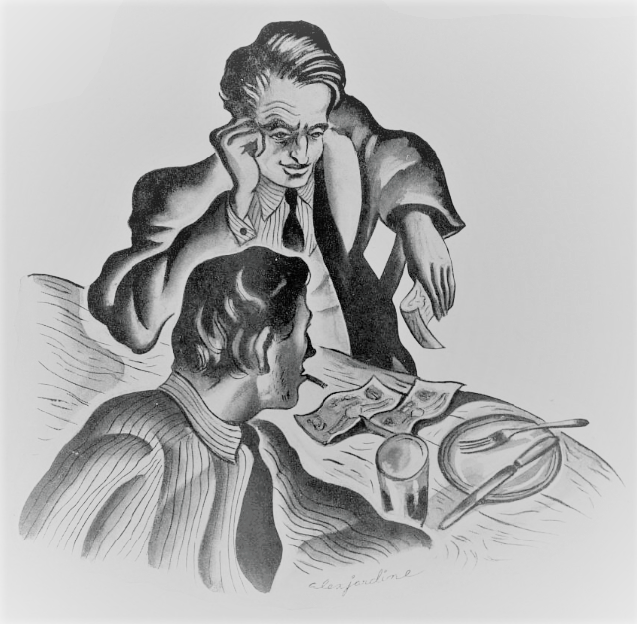