The phrase old soldiers never die (they simply fade away) means that, although soldiers may live into old age, their lives and accomplishments fade into oblivion.

This phrase originated in a British Army song, one version of which was published in The Long Trail: What the British Soldier Sang and Said in The Great War of 1914–18 (London: Andre Deutsch, 1965), by the Anglo-Irish soldier, journalist and author John Brophy (1899-1965) and the New Zealand-born British lexicographer Eric Honeywood Partridge (1894-1979):

This song is a parody of a hymn titled Kind Words Can Never Die. This is the beginning of the hymn, from the earliest version that I have found, published in The Sabbath-School Bell: A New Collection. Choice hymns and tunes, original and standard; carefully and simply arranged as solos, duetts, trios, semi-choruses and choruses, and for organ, melodeon or piano. Compiled by Horace Waters (Philadelphia: Presbyterian Board of Publication, 1859), by Horace Waters (1812-1893):

Words by M.   Music by Sister Abby, of the Hutchinson Family.   Arr. by H. Waters.

Kind words can never die,
Cherished and blest,
God knows how deep they lie
Stored in the breast;

Like Childhood’s simple rhymes,
Said o’er a thousand times,
Go thro’ all years and climes
The heart to cheer.

In a letter that she wrote, “under date of October 19 [1914]”, from Freshwater, Isle of Wight, to “a relative in Wilmington”, “a young woman nurse” clearly explained that the soldiers’ song parodies the hymn—this letter was published in the Wilmington Morning News (Wilmington, Delaware) of Thursday 12th November 1914:

“Our patients are not wounded men from the front, but men of the garrison here who are ill or meet with accidents, etc. […]
“[…]
“I pass every day a camp of men. • • • It is interesting to see the men at work. As they march we can hear them singing ragtimes or the song no English folk will ever forget, ‘It’s a Long, Long Way to Tipperary.’ I guess the Germans know that song by now. Perhaps some of the men will come along after a march and you hear some one shout ‘Are we down-hearted?’ The other[s] take it up and it’s ‘No! No! No!’ along the lines. Sometime of late it’s the tune of ‘Kind words can never die,’ only they sing:
“‘Our soldiers never die, never die, never die. O, we soldiers never die; they simply fade away.’ Then another lot will come along with a mouth organ and old biscuit-tin band. Such a merry lot they are.”

An article about Thomas Atkins (i.e., the typical private in the British Army), published in The Hampshire Advertiser (Southampton, Hampshire, England) of Saturday 10th October 1914, had already evoked the fact that the soldiers’ song is a parody:

Tommy’s high spirits and sense of humour never desert him. As often as not he is singing as he marches by. It may be a music-hall song, or it may be that sudden and disconcerting chant of “We’re here—we’re here—we’re here—” followed by a wild and blood-curdling yell that gives the Red Indians’ war-whoop points and a beating. Or perhaps it is a typical barrack-room parody such as—
Old Soldiers never die,
Never die,
Never die;
Old Soldiers never die—
No, never die!

For example, “a corporal in the First King’s Royal Rifles” mentioned “the old song” in a letter that he wrote from a Woolwich hospital after being wounded in active service—letter published in The Midland Daily Telegraph (Coventry, Warwickshire, England) of Monday 7th September 1914:

We have had a rough time I can assure you, and the old song still stands good—“Old soldiers never die,” but they go near it.

The earliest mention of this song that I have found is from the account of a dinner given in honour of Colonel Scott, who had “reached the age limit of service as Commanding Officer of the 3rd Volunteer Battalion Gordon Highlanders”—account published in the Buchan Observer and East Aberdeenshire Advertiser (Peterhead, Aberdeenshire, Scotland) of Tuesday 25th February 1908:

the company, on the call of Colonel Rennie, joining in lustily singing the chorus “Old soldiers never die”

And the earliest occurrence of the phrase old soldiers never die that I have found is from the account of a dinner given in honour of the officers and men of the Burlington Rifles “B” Company, which Colonel-Sergeant Stephenson was leaving “after a continuous service of twenty-nine years”—account published in the Bridlington Free Press (Bridlington, Yorkshire, England) of Friday 11th April 1913:

Col.-Sergt. Stephenson was received with the singing of “He’s a jolly good fellow” in returning thanks. He agreed with Sergt.-Instructor Webster that last year the ladies had helped them very considerably, and he hoped they would do so again. As to his leaving there was a saying that “old soldiers never die.” (Laughter.)

The second-earliest occurrence of the phrase old soldiers never die that I have found is from the account of a dinner given in honour of Sergeant-Major M. T. Elliott, who was leaving the Bedfordshire Regiment of Imperial Yeomanry—account published in The Bedfordshire Times and Independent (Bedford, Bedfordshire, England) of Friday 24th April 1914:

The Chairman said that […] there was an old saying “Old soldiers never die.”

Cf. also meaning and origin of ‘to come the old soldier over someone’.

These are two of the cartoons of Old Soldiers Never Die: Old Bill Sees History Made: By Captain Bruce Bairnsfather, published in The Bystander (London, England) of Friday 24th November 1939: 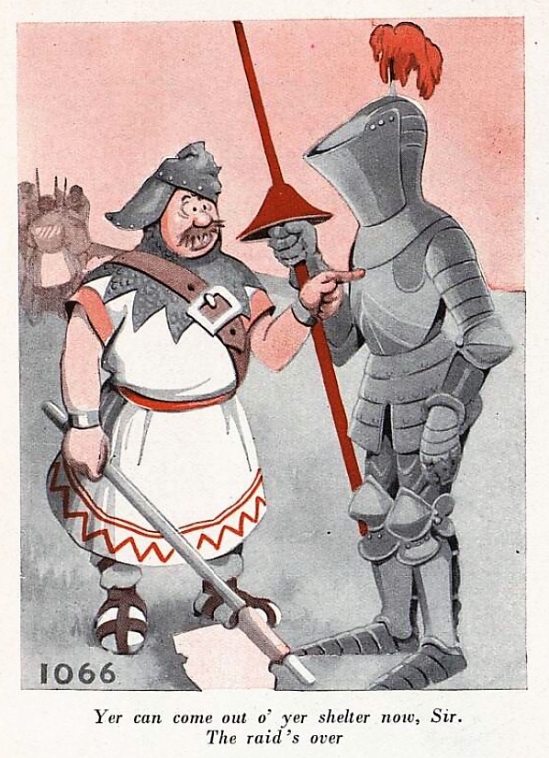 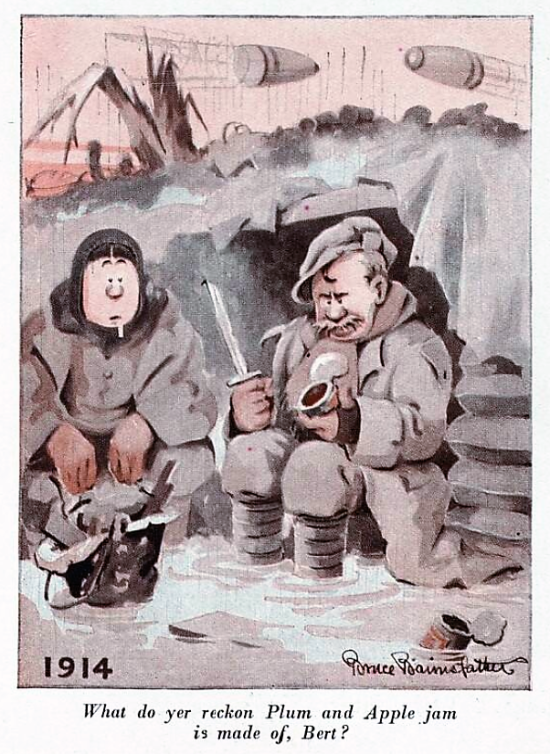 1914—What do yer reckon Plum and Apple jam is made of, Bert?