The phrase to follow the man from Cook’s, now obsolete, means to comply with the direction or option favoured by someone else.

It occurs for example in the following from The Palm Beach Post (West Palm Beach, Florida) of Wednesday 29th May 1935—the author was drawing the conclusions from the collapse of the National Industrial Recovery Act of 1933, a law that established industry codes governing business practices to ensure fair competition, more flexible pricing policies, and improved working conditions:

Any attempt arbitrarily to control or manage from a bureau at Washington the stupendous industrial structure of this land is foredoomed to failure.
This nation, extending territorily [sic] from ocean to ocean and “from pine to palm,” composed in measurable degree of a heterogeneous people carrying in mind and blood, highly treasured traditions that are the offspring of two centuries of conflict with nature and with each other, cannot overnight, as it were, be card-indexed, lockstepped, and compelled “to follow the man from Cook’s.”

The phrase to follow the man from Cook’s:
– refers to the tours that were organised by the travel agency Thomas Cook and Son;
– was originally the title of a song from a musical comedy titled A Runaway Girl (1898).

A brief history of Thomas Cook and Son

THE KING OF TOURISTS.

By the death of Mr. John Mason Cook, the head of the well-known firm of tourist agents, the world has lost the inventor of the personally-conducted tourist system, which is now so popular in this country. Mr. Cook would take you anywhere in the civilised world if you paid him well enough for doing it. It has always proved thoroughly safe in the words of the modern song to “Follow the man from Cook’s.” The system had very small beginnings. Mr. Cook’s father organised a temperance society’s excursion from Leicester to Loughborough, and this suggested to the son the idea of extending the scope of these trips. At the age of ten years he shared with his father the work of arranging a trip for 500 people from Leicester to Syston, including a railway journey of five miles in a special train and then a two-mile walk to the Mount Sorrel hills. Thenceforward he devoted himself to catering for the pleasure-loving public, and joined the Midland Railway Company at the age of fifteen years. The experience he gained by the time he reached his majority justified the Company in appointing him to the post of superintendent of the excursion traffic throughout the system. Recognising, however, that there was an opening for an enterprising business man who could undertake the arrangement of pleasure tours, both at home and abroad, he set up business for himself. There was not much rest for the tourist agent in the early days of the business. His diary shows that between 1855 and 1873 he spent on an average 100 nights out of bed, and travelled 50,000 miles a year. Cook is a name as well-known on the Continent as at home; there are agencies in almost every great capital, and the latest place on the list is said to be Khartoum. Mr. Cook, who was thoroughly familiar with Egypt, placed a flotilla of steamers on the Nile, and in 1884 and 1885 lent them to the Government for the rescue of General Gordon. One of his next big schemes was to take charge, by arrangement with the Indian Government, of several hundreds of devout Moslems who were anxious to visit Mecca.
The crowning triumph of Mr. Cook’s life was when the German Emperor placed the arrangements for his Eastern tour in the hands of the agency. The patronage of the Kaiser came about in this way. In the spring of 1896 Mr. Cook undertook to prepare everything for the Emperor’s visit to Vesuvius, where the former possessed a funicular or rope-traction railway, by means of which the traveller reached the summit. Whilst the Emperor and the tourist agent were on Vesuvius, the former mentioned his scheme for an Eastern tour. He said he did not intend to accept the hospitality of the Sultan, and intended to place himself in Mr. Cook’s charge. The features of that tour will be fresh in the public memory. It was the biggest pic-nic ever known. There were six special trains, and for crossing the plains of Palestine 1,430 horses, mules, and pack animals were engaged; 116 carriages and baggage carts, and 800 muleteers and 290 waiters. The trip was very successful, and at its close Mr. Cook received the Order of the Golden Crown of Prussia. But the worry and anxiety undoubtedly contributed to the illness which has now deprived English pleasure-seekers of his services.

First produced at the Gaiety Theatre, London, on Saturday 21st May 1898, A Runaway Girl is a musical comedy by Harry Nicholls and Seymour Hicks, with lyrics by Aubrey Hopwood, and music by Ivan Caryll and Lionel Monckton. In the USA, it was first produced it on Thursday 25th August 1898 at Daly’s Theatre, Broadway, New York City, by the U.S. playwright and theatrical manager Augustin Daly (1838-1899).

This is the plot of A Runaway Girl, as published in The Globe and Traveller (London, England) of Monday 23rd May 1898:

A young English girl in a convent school in Corsica is suddenly informed that she has to go back to England, to be married to a young man whom she has never seen. Resenting the order, she runs away from the school, in company with a “lay brother” and a troupe of travelling musicians, which includes a certain Martha Tompkins, “from the Blackfriars-road.” Arrived at Ajaccio, the girl meets there a youth, of her own nationality, to whom her heart goes out, and with whom (accompanied by Martha, the “lay brother,” and a sympathetic English jockey), she elopes to Venice. We need hardly say that, though neither of the lovers know it yet, the youth is the very person for whom the girl has been destined in marriage. At Venice the truth comes out. The girl’s guardians trace her there, and, not having seen their ward, at first mistake Martha for her; but they are soon disillusioned, and, explanations over, the lovers are made happy by the prospect of immediate union.

One of the characters of A Runaway Girl is a Cook’s agent, and this is the chorus of Follow the Man from Cook’s, as published in The Daily Mail (Hull, Yorkshire, England) of Tuesday 23rd August 1898:

EARLY OCCURRENCES OF THE PHRASE FOLLOW THE MAN FROM COOK’S

The following from the column Talk of London, in The Penny Illustrated Paper (London, England) of Saturday 6th May 1899, shows how the title of the song from A Runaway Girl came to be used as a phrase:

H.R.H. the Duke of Cambridge, who has returned in splendid health even for the “Grand Old Man of the Army” from the Riviera, will doubtless experience a hearty welcome on Monday morning next, when he opens a most interesting Exhibition of Imperial scope at Earl’s Court. To that omniscient statesman and enlightened traveller, the Right Hon. Sir Charles Dilke, M.P., * were the Executive indebted for the comprehensive and apt title of “Greater Britain,” so felicitously chosen for this new Show. It may be remarked in parenthesis that in publishing his instructive work, “Greater Britain,” some years ago, Sir Charles Dilke set the fashion, and a most invaluable fashion it is, of extending the “grand tour,” which used to be confined to the Continent, to the wide world. It has now become a recognised custom to “Follow the Man from Cook’s” (as they sing so merrily in “A Runaway Girl,” at the Gaiety), with the result that Sir Charles Dilke’s example is followed with signal advantage to the nation and to India and our Colonies into the bargain.

The ordinary tourist deserves more compassion than is usually bestowed upon him, and especially the ordinary tourist at Killarney. To have to drink in such scenery in a painfully mapped-out manner, to helplessly “follow the man from Cook’s,” appears, in comparison to our mode of doing it, as a view of the Jubilee procession from a lamp-post was to a ground-floor seat in St. James’s-street plus a champagne lunch.

‘The Dwarf of Blood’ used the phrase in his column Round the Town, in The Sporting Times. Otherwise known as the “Pink ’Un” (London, England) of Saturday 2nd September 1899:

My doctor was seriously exercised in his mind that I might really believe that the Harrogate sulphur water was made with rotten eggs; so he hiked me down to the pump-room and took me into the bowels of the earth to show me the old well from which the water is drawn. In the floor of the dungeon below the pump-room is a little pit, and at the bottom of this little pit is a big crack in the rock, and from this crack comes up the slightly gaseous water, of which I drink two soda-water glassfuls each morning. There were no eggs about the place. Indeed, I didn’t even see a hen there.
Another sight that my doctor, playing at “follow the man from Cook’s,” showed me is the new Greville electric heat bath, the machinery for which looks like a clumsily-made suit of armour for an enormously portly giant. 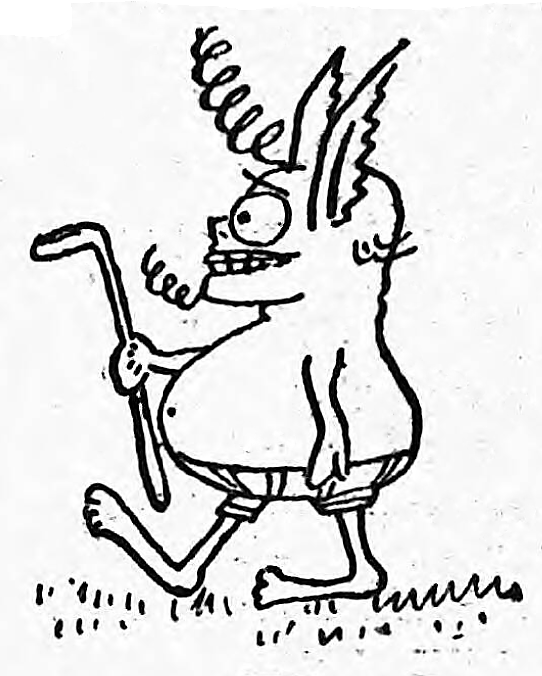