It alludes to the overstuffed closet in the U.S. radio comedy series Fibber McGee and Molly (1935 to 1956). Fibber and Molly were interpreted by the U.S. comedians Jim Jordan (1896-1988) and Marian Jordan (née Driscoll – 1898-1961), a real-life married couple. Christopher H. Sterling explains the following in The Concise Encyclopedia of American Radio (Routledge: New York and London, 2004):

Fibber was a lovable windbag and Molly his patient wife. This program may have had more running gags than any other, the most famous being a hall closet so stuffed full of junk that every time the door was opened everything would come crashing down in a nearly epic cacophony of sound. Listeners at home could either laugh at the closet of their imaginations or at the sound effects wizardry that went into its creation. At the end of the last clink, Fibber would inevitably say, “I’ve gotta clean out that closet one of these days”.

The earliest occurrence of Fibber McGee’s (hall) closet that I have found is from a Christmas advertisement for The Sport Shop, 328 Huron Avenue, published in the Port Huron Times Herald (Port Huron, Michigan) of Sunday 14th December 1941—here, the phrase is used positively with reference to profusion:

A cryptic use of the phrase occurs in an article published in the Little Hawk Weekly of the Iowa City High School, a supplement to the Iowa City Press-Citizen (Iowa City, Iowa) of Friday 1st May 1942—a reporter is “asking some of the little “kiddies” around school what they are going to do this summer”:

When “the real McCoy” (Bill Sangster) was asked about his plans he said “I’m going to fall out of Fibber McGee’s closet”—I wonder how much he was paid for that gag.

The phrase appeared in the caption to the following photograph, published in The Daily Oklahoman (Oklahoma City, Oklahoma) of Saturday 11th April 1942—scrap metal was collected to help the war effort: 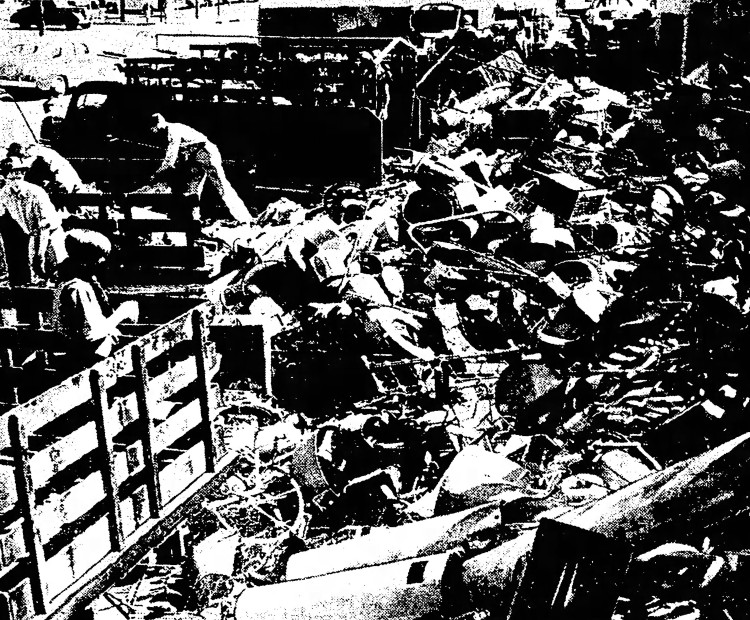 Oklahoma City’s main salvage collection point at Fourth street and Walker avenue looked like Fibber McGee’s closet Friday afternoon. Trucks piled tons of scrap metal there after collecting it from homes over the city as shown as left.

The phrase was actually used in a campaign aimed at collecting scrap rubber to help the war effort—as exemplified by the following is from The Evening News (Harrisburg, Pennsylvania) of Saturday 20th June 1942:

In almost every home there is one or more places that might be compared with Fibber McGee’s ‘hall closet’ where he collects the articles he may again use . . . it is quite full as McGee fans will be quick to recognize. In your own closets and storage areas, the most important thing you possess is RUBBER! Rubber must be the cushioning upon which our armed forces will ride to glorious victory. At the moment your greatest service is to take every single particle of rubber that you do not need and turn it over to the great National bank of used and scrap rubber. Our Government must know EXACTLY how much rubber is available to be reclaimed and what percentage must be used for the armed forces, also, if any will be available for necessary civilian uses. The prime purpose of our lives is to win this war . . . quickly and thoroughly! It is your patriotic duty to take every scrap of rubber you can possibly spare and sell it or donate it to our Government!

Civil defence too used the phrase during the Second World War. The following was published in several newspapers in June 1942—for example in the Pittsburgh Post-Gazette (Pittsburgh, Pennsylvania) of Tuesday 2nd:

Fibber McGee’s cluttered closet, made famous by the comedian on his broadcasts, is doing its bit for Los Angeles air raid defense preparations. Fire department instructors teaching air raid wardens how to remove all possible inflammables from homes are using McGee’s closet as a horrible example of what not to do.
“If you find a closet like Fibber’s,” they tell the air raid wardens, “for Pete’s sake, clean it out.”

In September 1942, civil defence put to use the return of Fibber McGee and Molly after a summer absence. Several newspapers published the following photograph in which Molly is looking at the closet, the contents of which have just crashed down on Fibber, who is lying on the floor—the following, for example, sponsored by KSTP, a local radio station, is from the Minneapolis Star Journal (Minneapolis, Minnesota) of Tuesday 29th September 1942: 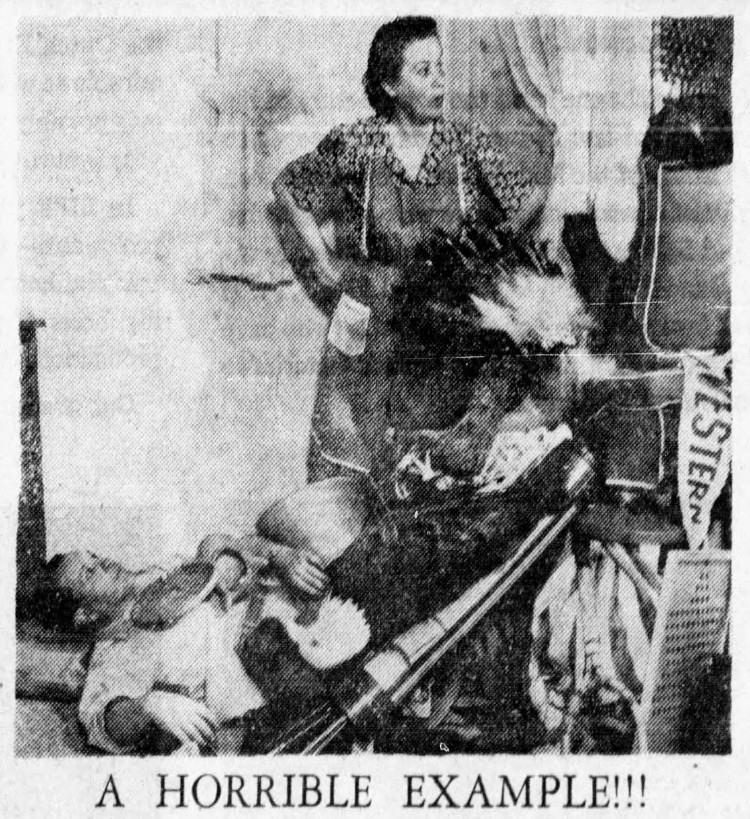 Fibber: Gotta clean out that closet one of these days.
Molly: Heavenly days McGee!
Fibber McGee’s cluttered closet, made famous by the comedian on his broadcasts, gives you an idea of what not to do in case the air raid warden takes the notion to visit your home.

DROP INTO THE COZY LITTLE COTTAGE AT 79 WISTFUL VISTA1 AND HELP CELEBRATE THE HOMECOMING OF
“FIBBER MCGEE AND MOLLY”
8:30 P.M.
FOR JOHNSON’S FLOOR WAX2

1 Fibber and Molly were living at 79 Wistful Vista.
2 Fibber McGee and Molly was then sponsored by, S.C. Johnson & Son, Inc.

A guest column purportedly written by Fibber McGee, published in The Wisconsin State Journal (Madison, Wisconsin) of Wednesday 19th August 1942, mentions the use of the phrase Fibber McGee’s (hall) closet in civil defence but also its cultural significance:

A Guest Column by Fibber McGee

I suppose there are a lot of people who are worried because Molly and I never clean out that closet. We used to worry about it, too. Why many’s the Tuesday I’ve set out to put things in order but before I’d know it our writer Don Quinn had me started out doing something altogether different. He’s written for Molly and me for 13 years, but I still never know what to expect when I step up to the microphone. I just open my mouth and out pop Don’s words.
But as I was saying about that closet. One week we did get it cleaned out, but before the program was over Uncle Dennis had filled it up again. I used to worry about it, but I don’t any more. I think it’s a good thing—kind of symbolical like.
Just last week an air raid warden out here in southern California was trying to explain to his neighbors that they shouldn’t have any old papers and stuff around that might catch on fire easily. “What I mean,” he says, “is don’t have a closet like Fibber McGee’s.” Now that just shows how that closet is serving a worthy cause. How else could that warden have explained what he meant?
And then it gives work to people. Why, sometimes we have to have an extra sound effects man on the show just to open that closet door. The boys have set up a kind of competition to see who can make the best crash of stuff falling out. You see, it even keeps the fellows interested in their work.
That closet has a kind of dignity. Nobody’s named a sandwich for it (it did get mentioned in a song, “The Sound Effects Man.”), but a lot of people know about it. For instance one of those tony home decorating magazines is doing a whole section on home closets, and the first thing the editor though [sic] of was a picture of our closet—with all the magazines and pans and coat hangers tumbling down on me. It’s part of the American scene, she said, and added something about the seamy side of life.
Look what a constant reminder it is for spring cleaning. It’s very easy to forget about spraying the closets for moths and burning sulphur once a year, but not when you hear about Fibber’s closet every Tuesday night. You can’t help but remember.
It helps correspondence, too. Now, my friends don’t have any trouble ending their letters. They can always wind up with some smart crack like, “Come and see us when you get the closet cleaned out,” or “Yours until you get the closet straightened.” When the kids stop Molly for an autograph they always have something to say, too, about when’s she gonna put me to work on that closet?
Molly doesn’t agree with me—she says it would only be the beginning of the argument, but I think it keeps peace in a lot of homes. It’s the goat for things. Like if a wife keeps pecking at her husband to clean out the garage or the storeroom and he wants to go fishing, he can always point out that they’re not as bad yet as Fibber McGee’s closet.
And then, like Don Quinn says, “What would we talk about on the program if we didn’t have that closet?”

Sage Brushing
A lot of us are like Fibber McGee’s closet . . . Every time we open our mouths everything we know tumbles out.
—Maxine Adams.