The British-English phrase the acceptable face of —— denotes the more tolerable aspect of (something usually perceived as unpopular or objectionable).

It originated in the unacceptable face of capitalism, used by the Conservative statesman Edward Heath (1916-2005), Prime Minister from 1970 to 1974, during a debate at the House of Commons on Tuesday 15th May 1973.

This debate took place after it was revealed that Lonrho, an international mining and industrial company, was making large pay-offs and exploiting tax loopholes. Opposition MPs accused Edward Heath of using double standards by:
– refusing to intervene in the scandals of big business caused by the dubious morality in boardrooms,
– while constantly intervening and moralising about the legitimate wage claims of trade unions.

The following is a passage from this parliamentary debate—Joseph Grimond (1913-93), MP for Orkney and Shetland, was a member of the Liberal Party:

Mr. Grimond: When the Prime Minister talks to the CBI [= Confederation of British Industry], will he ask it to condemn unequivocally the sort of goings on that we have all read about at Lonrho […]? Will he also point out to the CBI that greed does not now seem to be a monopoly of the trade unions?
The Prime Minister: It would not be necessary for me to ask the CBI to make a statement of that kind, and as a responsible body it should be prepared to make its own statement. […] It is the unpleasant and unacceptable face of capitalism, but one should not suggest that the whole of British industry consists of practices of this kind.

I have found an early use of the unacceptable face of —— in Press Council inquiry over call-girl affair, published in The Birmingham Post (Birmingham, Warwickshire, England) of Tuesday 5th June 1973, “in the wake of the weekend uproar over the disclosure by the News of the World that it had taken pictures of Lord Lambton1 with prostitutes”:

Mr. Winston Churchill2, Conservative MP for Stretford, yesterday described the part of the News of the World played in the Lambton affair as “an unacceptable face of journalism.”

In the following from The Birmingham Post (Birmingham, Warwickshire, England) of Saturday 9th June 1973, about the Conservative politician Janet Young (1926-2002), it is unclear whether a wholly acceptable face of the Conservative Party in power alludes to Edward heath’s above-mentioned speech:

First Lady of the environment
By John Lewis

Lady Young, at 46, the new environment Minister, presents a wholly acceptable face of the Conservative Party in power—at least at first glance.

The Government is expected to face a big row in the Commons over yesterday’s announcement that shareholders of the old bankrupt Rolls-Royce group—in which over £250 millions of public money was sunk—are to receive one of the largest payouts ever made in a company liquidation.
Under an out-of-court settlement between the new Government-owned company, Rolls-Royce (1971), and the receiver, the Government has agreed to pay £87.5 millions (less some deductions) for the aero-engine assets, which were nationalised in February, 1971. […]
[…]
Workers of the bankrupt Rolls group will receive payment in full for their shares. This special treatment has been achieved by the receiver putting discreet pressure on the City clearing banks and accepting houses who have agreed to cough up an extra £1.9 millions out of their claims for deferred interest.
What is likely to cause the row is not this “acceptable” face of capitalism but the fact that the mass of shareholders, whose stock would have been worthless without Government intervention, are to receive a record distribution.

The acceptable face of taxpaying

Salaries paid into the Cayman Islands and six-figure company loans for house purchase are probably the unacceptable face of tax avoidance. But there is a human face too, for avoidance can help taxpayers at the other end of the scale. No moral stigma is attached.
In the words of one classic legal judgement, “Anyone is entitled to prevent, as far as he honestly can, the depletion of his means by the Inland Revenue.” Evasion, where the taxpayer breaks the rules to keep his money, is very different.

Daniel McGeachie and Brian Steel punned on the phrase in the following from the Daily Express (London, England) of Friday 9th November 1973:

Putting on a pretty face 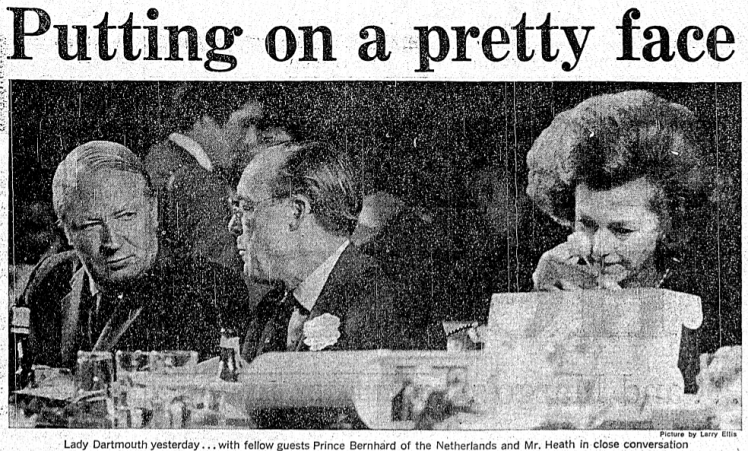 Lady Dartmouth left Mr. Heath to clean up the face of capitalism yesterday . . . while she made a few running repairs to her own.
Out came the compact and on went the powder right in the middle of lunch.
Then it was back to business at the Institute of Directors annual conference in the Royal Albert Hall.
Lady Dartmouth stood in at short notice to speak at the Conference—proving beyond doubt that in such matters she is more than just a pretty face.
For Mr. Heath, however, it was the face of capitalism that came in for even closer scrutiny.
He called on Britain’s bosses to help him give capitalism a human face—“perhaps a pleasant and acceptable one.”