The term Bamboo Curtain denotes the political and economic barrier between territories under the control of the Communist regime in China and non-Communist countries, especially from the late 1940s to 1972.

It was coined after Iron Curtain, denoting a notional barrier dividing the capitalist West and the Communist countries of the Eastern bloc, prior to the decline of Communism that followed the political events in eastern Europe in 1989.

I have, however, found earlier figurative uses of bamboo curtain in a different sense, i.e., the censorship imposed within a South-East Asian region or country, which isolates it from the rest of the world.

The first of these uses is from No Censorship Wanted, published in The Lexington Herald (Lexington, Kentucky) of Friday 16th April 1948: 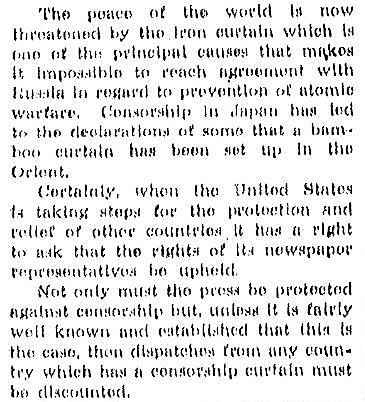 The peace of the world is now threatened by the iron curtain which is one of the principal causes that makes it impossible to reach agreement with Russia in regard to prevention of atomic warfare. Censorship in Japan has led to the declarations of some that a bamboo curtain has been set up in the Orient.
Certainly, when the United States is taking steps for the protection and relief of other countries, it has a right to ask that the rights of its newspaper representatives be upheld.
Not only must the press be protected against censorship but, unless it is fairly well known and established that this is the case, then dispatches from any country which has a censorship curtain must be discounted.

The second-earliest use of bamboo curtain referring to censorship is from Malaya Press To Be Liberalized, published in the Binghamton Press (Binghamton, New York) of Wednesday 25th August 1948:

Singapore—(AP)—An authoritative source said today senior British officials are reconsidering a lower-level decision which has permitted a bamboo curtain of censorship to be dropped around police activities against Communist insurgents in Malaya.
The informant said a more liberal press policy will be ordered soon.

The earliest instance that I have found of Bamboo Curtain in its current sense is from a letter published in The Readers’ Forum of the Lincoln Evening Journal (Lincoln, Nebraska) of Friday 26th November 1948. On the question What Should the U.S. Do About China?, a Chinese student named Tan Meng Kiat wrote the following:

The corrupt, totalitarian nationalist government represents only a small minority of the Chinese people, so that, support of such a government by the United States would be most un-democratic, and would result in the lowering of American prestige not only in China but also thruout South-East Asia. As regards the fear of a communist China, I do not believe that is a possibility, for the communists in China are different from communists or communism of the west. Mr. Owen Lattimore1 called them “agragrian [sic] reformers,” tho I prefer to use the simpler term “socialists.” Even the British have informally recognized them as “socialists” saying that a “Bamboo Curtain” in China would be different from the “Iron Curtain” in Europe2. Due to the wide differences between totalitarian and socialism, these socialists in China — are called communists, which would not have been the case if it had been between capitalism and socialism.

1 Owen Lattimore (1900-89), American scholar of China and Central Asia
2 I have not been able to trace that British declaration.