The phrase there’s one, or a sucker, born every minute expresses dismay or glee at the gullibility of people.

This phrase was originally used by those who were exploiting the credulity of others.

The earliest instance that I have found is from Essay on False Genius, published in The European Magazine, and London Review (London) of January 1806:

It was the observation of one of the tribe of Levi, to whom some person had expressed his astonishment at his being able to sell his damaged and worthless commodities, “That there vash von [= was one] fool born every minute.”

The usual early form of the phrase was there is a flat born every minute. The following definition of the noun flat is from The Slang Dictionary; or, The vulgar words, street phrases, and “fast” expressions of high and low society. Many with their etymology, and a few with their history traced (London, 1864), by the English publisher and author John Camden Hotten (1832-73):

Flat, a fool, a silly or “soft” person, the opposite of sharp. The terms appear to be shortenings for “sharp-witted” and “flat-witted.”

The earliest instance of there is a flat born every minute that I have found is from Bell’s Life in London, and Sporting Chronicle (London) of Sunday 22nd February 1835:

A Flat, from Wolverhampton, named Thomas Bickley, was on Monday robbed of 15 sovereigns by two men, named Hayes and Roome, under the old pretence of placing them safe in his fob, to preserve them from sharpers. The men have been examined at Union-Hall, and remanded. It is only surprising, after the repeated exposures of this species of robbery, that fresh flats are so frequently picked up; but, as these ingenious speculators say, “there is a flat born every minute;” and it is not likely the race will become extinct.

The second-earliest instance that I have found is from an article about the Epsom races, which “commenced on Tuesday, and terminated on Friday”, published in Bell’s Life in London, and Sporting Chronicle (London) of Sunday 7th June 1835:

The amusements apart from the mere races were such as are always provided on such occasions; and as gambling constitutes one of the principal inducements to the sports of the Turf, so gambling, in another shape, added to the general excitement; and as, according to the doctrine of the “thimble-riggers,” there is a flat born every minute, there was no lack of this class to reward the ingenuity of “les chevaliers d’industrie,” who were wide awake to every “move,” and did not fail to hook a gudgeon when he showed even the slightest disposition to “nibble.”

A variant appeared in Bell’s Life in London, and Sporting Chronicle (London) of Sunday 31st July 1842:

As the thimble-riggers say of flats, “there’s a blockhead born every minute.”

The following is from an article about the horses racing in the Derby, published in The Morning Post (London) of Monday 27th February 1843:

Everton, however, since his arrival at Dawson’s, is a worse favourite than he was before. He is backed because he is sure to start. There is a fool born every minute. True, oh King.

The earliest instance of there’s a sucker born every minute that I have found is from an article about gambling in Chicago, published in The Inter Ocean (Chicago, Illinois) of Thursday 2nd January 1879; an “old-timer” tells the reporter that, although the officials of the Police Department state that gambling is completely suppressed, “it is only changed, not stopped”:

“There ain’t much doing here; of course the boys are around; they don’t view gambling in the same light the religious world does; it’s their living, and they feel they’ve got as much right and as much standing in Chicago as anybody else; goodness knows how they live,
IT’S MIGHTY HARD TIMES
with the most of them; in the season they make a bit on base ball, or on the races, and then, you know, ‘there’s a sucker born every minute.’”

It is often said that the American showman, politician and businessman Phineas Taylor Barnum (1810-91) declared that there’s a sucker born every minute.

The earliest mention that I have found of there’s a sucker born every minute associated with P. T. Barnum is from Suckers, published in the Neosho County Journal (Osage Mission, Kansas) of Thursday 6th June 1889: 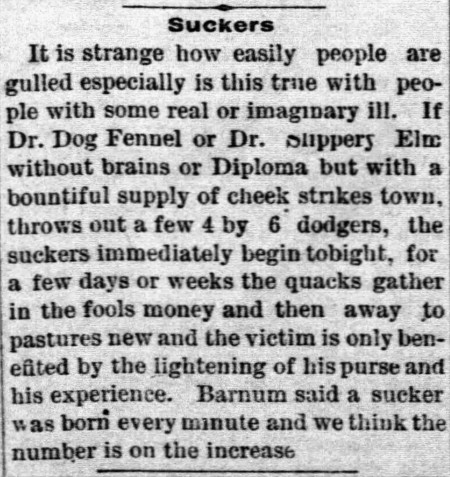 It is strange how easily people are gulled especially is this true with people with some real or imaginary ill. If Dr. Dog Fennel or Dr. Slippery Elm without brains or Diploma but with a bountiful supply of cheek strikes town, throws out a few 4 by 6 dodgers, the suckers immediately begin to bight [= bite?], for a few days or weeks the quacks gather in the fools [sic] money and then away to pastures new and the victim is only benefited by the lightening of his purse and his experience. Barnum said a sucker was born every minute and we think the number is on the increase.

There is not a whit of evidence, suggested Mr. Saxon, that Barnum ever said anything as callous as, “There’s a sucker born every minute.”
“There’s no contemporary account of it,” said Mr. Saxon, “or even any suggestion that the word ‘sucker’ was used in the derogatory sense in his day. Barnum was just not the type to disparage his patrons.”

But, contrary to what Arthur H. Saxon reportedly said, “the word ‘sucker’ was used in the derogatory sense in [Barnum’s] day”—cf. the above-mentioned newspaper articles from 1879 and 1889, and the following from “a loafer’s soliloquy”, published in The Advocate (Wilkes-Barre, Pennsylvania) of Wednesday 11th April 1838:

Pigs has their troubles like humans—constables catches ’em dogs bites ’em and pigs is sometimes almost as done-over [= worn-out] suckers as men.