The term begging bowl is used figuratively in reference to a grovelling or obsequious appeal for financial help.

However, in its original sense, a bowl carried by a Buddhist monk to receive food, begging bowl implied a relationship based on deference, as exemplified in the following description of a baṇa maḍuwa (i.e. a temporary building for reading the baṇa, or sacred books of Buddhism), published in The Graphic (London) of Saturday 27th September 1890:

During the rainy season in Ceylon, when Buddhist priests are unable to go about from door to door begging for their daily food, temporary erections, such as that depicted in the sketch, are put up by pious Buddhist laymen in the vicinity of towns and villages, more or less embellished according to their means, with the double object of providing for the priests’ daily wants in a central spot, and of enabling the people to have an opportunity of hearing Buddha’s sacred precepts read, and thereby gaining merit to themselves and others. […]
On the left upper corner is shown the worship of a priest, a newly admitted child of ten or twelve, with his attendant behind him; he receives the dole of food in a begging bowl. 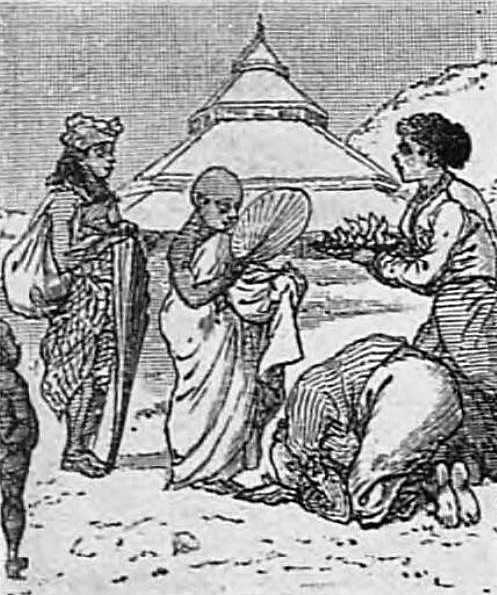 The earliest instance that I have found of begging bowl in its literal sense is from an article titled Tibet, published in The Cornhill Magazine (London) of February 1878:

There grew up a religion which was a mixture of pure Buddhism, with the wild magic worship of the native Tibetans. In the words of a Chinese historian, the Lamas “belched out fire and threw up swords, and, far from following the lives of celibates, they married and brought up families. Their time, also, they devoted to the promotion of their own worldly interest, instead of reverently following the ordinance of their faith, and bequeathed their professions, with their garments and begging bowls, to their sons after them.”

This practice also exists in Hinduism; the following is from Sidelights on the religions of India, published in The Graphic (London) of Saturday 6th December 1930:

The stoics: “Sadhus” in the scorching heat of Benares
These two “Sadhus,” religious Hindu beggars, are of a type almost incomprehensible to Europeans. Taciturn travellers on foot over immense distances, they combine an obstinate introspectiveness with tremendous endurance; and whether in the frozen Himalaya or the scorching plain, they wear nothing but their single rag. Their entire possessions are frequently nothing but the cooking pot and begging bowl

Members of Christian missionary orders and organisations also adopted the practice; the following, for example, is from The Western Times (Exeter, Devon) of Saturday 18th August 1900:

The life of a Salvation Army officer in India is a self-sacrificing one. They live and dress as the natives. They receive no salary, and they depend on the natives for their food; they go amongst them with their begging bowl and receive what food the natives feel inclined to give them.

The earliest figurative use of begging bowl that I have found is from The Ardrossan and Saltcoats Herald (Ardrossan, Scotland) of Friday 4th September 1903:

If appearances are not wholly deceptive, we may take it that Kilmarnock rejoices in its entertainment of Dr Carnegie last Saturday. The general public—by whom we mean those who were present at the various functions but took no part in them—seemed thoroughly to appreciate the purposeful eloquence of the local orators, and the local orators themselves were doubtless pleased with their sugared, though somewhat transparent, diplomacy. Diplomacy is certainly a good and an interesting game if you know how to play it, but when novices essay it the result is not invariably to be admired. Othello would have appeared badly as the Prince of Denmark. A ploughman in a minuet is apt to be a ludicrous and sometimes pathetic sight. To our mind, Kilmarnock’s diplomacy was bad in a double sense,—bad because it was clumsily contrived, and bad because it ought never to have been contrived at all.
When one comes seriously to consider the matter, one wonders that even Kilmarnock, with the episode of the Dick Institute yet a blemish in its history, should have played a part so shamefully undignified. Doubtless neither the shame nor the indignity are patent to the ordinary Kilmarnockian, and in charity we may suppose that they certainly were not patent to those who hold high office in the town. The trouble is that when Kilmarnock passed its wine-cup to Carnegie, it was really a begging-bowl disguised. What we object to is the disguise, the flimsy, clumsy, inadequate veil in which the Corporation and the School Board—two reputable bodies—sought to conceal their beggary. There was no need of any disguise. There was, in effect, no disguise. There was only a farce. What Dr Carnegie himself thought about it we cannot tell, but it seems tolerably certain that he would chuckle not a little when the dust of Kilmarnock had been shaken from his feet.
Why, in the name of all that is wonderful, could not the Corporation or the School Board, or whatever is the actual mendicant in this case, decently and directly ask the millionaire to help them? Why all this circus performance, all this kow-towing, all this windy palaver, and, in the name of common sense, why those hints so broad that they offend one’s sense of the graceful—like the waist of a Dutch vrow [= woman]? Had there been aught admirably fine, admirably subtle, in the hints one could have pardoned them. Had they been insinuated into the speeches with wit or even with intelligence they might have been condoned. But when you place your begging-bowl at a man’s feet, he is not likely to be unconscious of its presence just because you invite him to dance round it.
The truth is that the kind of intellect which directs the affairs of Kilmarnock is not the kind of intellect for diplomacy. Diplomacy demands wit, and, having wit, it demands a saving sense of humour.