Of American-English origin, the phrase you and whose army?, or you and what army?, is used to question a person’s ability to carry out a threat or challenge unaided.

The earliest instance that I have found is from Dale Plays the Game, a novel by Ann Forester, serialised in the Waterloo Evening Courier and Waterloo Daily Reporter (Waterloo, Iowa) in 1929; the following is from chapter 38, published on Wednesday 27th March:

“What are you two looking so fussed about? Who have you murdered and where have you hidden the body?”
“I’ll pull your ears for you, Slats!” Brant’s voice sounded natural once again.
“You and what army?” teased his sister.

The second-earliest instance is from Wray’s Column, in the St. Louis Post-Dispatch (St. Louis, Missouri) of Sunday 15th June 1930:

“You get out or be thrown out,” a very angry young holder of a working press ticket was hissing in the ear of a half-soused politician.
“Is that so? You and whose army are going to put me out? I’m here to stay.”

Hal Forrest (1895-1959) made Skeeter, “the Artful Dodger”, use the phrase when addressing a villain in an episode of the comic strip Tailspin Tommy published in the Miami Daily News (Miami, Florida) of Saturday 11th July 1936: 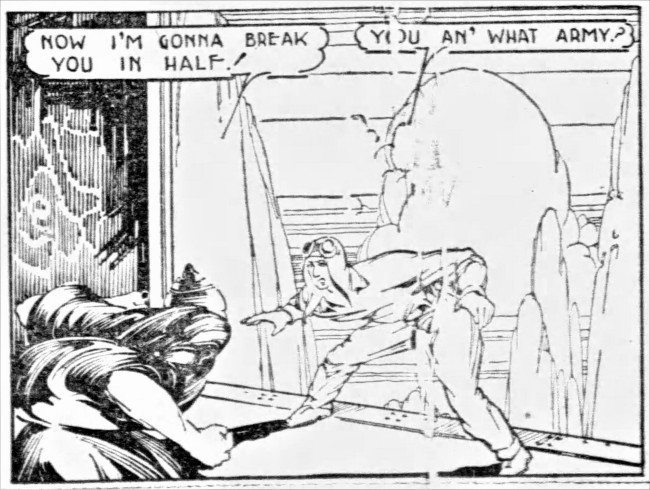