The origin of the sign the Swan with Two Necks is not a freak of nature. The correct name is the Swan with Two Nicks. In former times when swans were regarded as a delicacy for the table, they were marked with nicks in their bills to denote ownership. At the marriage feast of Henry IV. cygnets were served in the first course. In the fifteenth century cygnets were sold by London poulterers.
The swan is a Royal bird in England, and even to-day a swan which has no apparent owner belongs to the Crown. Formerly no one was allowed to own a swan without a licence, and these licences, which were given by Royal favor, were restricted to large land owners and to wealthy corporations. For more than 300 years two of the London city guilds, the Vintners Company and the Dyers Company, have shared with the Crown the ownership of the swans on the Thames from Southwark-bridge to Henley, a distance by water of over 40 miles. Every year representatives of these two companies and of the Crown go up the river in rowing boats to round up the young swans and mark them by nicks in their bills. This work which is carried out somewhat leisurely, takes a week. Half of each year’s new brood of swans belongs to the Crown, and the other half is divided between the two guild companies. The official records by which the companies claim ownership of the swans have been lost—probably in the Great Fire, when the halls of these two companies, as well as those of 42 out of the other 49 city companies, were destroyed. It is supposed that ownership of the Thames swans was vested in them by royal favor, because their halls were on the riverside, with lawns reaching down to the water.
The work of rounding up the swans for marking is known as swan-upping. Three boats, one representing the Crown and the other two the two guild companies, each flying in the bow a flag with the device of a swan, co-operate in rounding up the young birds. They cause much commotion among the swan families on the river. As a rule a mother swan stays by her young when they are being manœuvred by the boats into a favorable spot for capture, but the male head of the family usually gets away by acting on the principle of each one for himself. From a safe distance he indulges in protests of indignation at the intrusion of the boats. There are about 600 swans on the Thames between Southwark-bridge and Henley. They do not increase rapidly, as ninety years ago the number was 337.

The following appeared in the Norfolk and Suffolk Journal and Diss Express (Diss, Norfolk) on Friday 28th June 1946:

PRINTED OF THE BREWERS’ SOCIETY 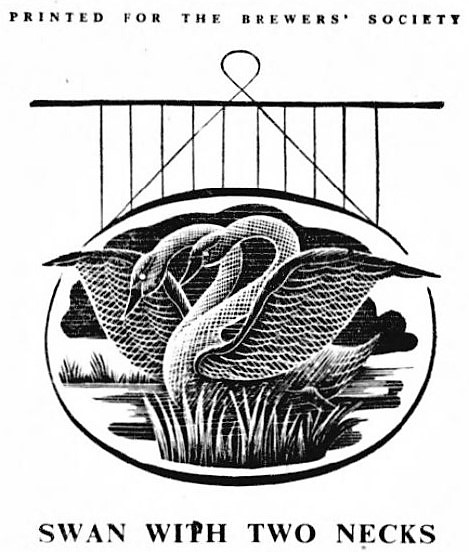 The origins of inn-names, like the sign boards themselves, are frequently obscured by time. Thus the “two necks” is likely to be a corruption of the “two nicks” which were cut on the swan’s beak to denote that it belonged to the Vintners, and not to the King. This sign, which can be seen outside inns all over the country, is still to-day the crest of the Worshipful Company of Vintners. How faithfully the customs of bygone days are reflected in the tradition of the English inn. So will the days in which we live be mirrored on the sign boards of new inns in the new communities now being planned.
Engraving specially designed by John Farleigh

However, the Vintners’ Company coat of arms does not feature a swan with two necks, but two swans; the following picture and description are from the official site of the Worshipful Company of Vintners: 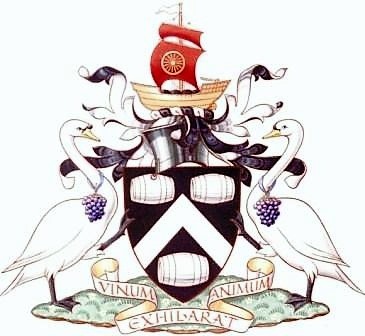 Shield: Depicted here are three tuns, or large barrels, that were used for transporting wine.
Swans: The crest is supported on either side by swans. The Vintners, the Crown and the Dyers are the only legal owners of swans on the Thames. There are sometimes two nicks in the swans’ beaks – the Vintners’ mark of ownership. Around the necks hang bunches of grapes.
Ship: A medieval ship called a caravel symbolising the Vintners’ connection with the wine producing area in France Gascony.
Gold Cart-wheel on sail: The gold cart-wheel on the main sail is a fifteenth century emblem for St Martin.
Motto: “Vinum animum exhilarat”, “Wine gladdens the heart”. The motto was registered in 1822.