The name Zeppelin, in full Zeppelin airship, denotes a large German dirigible airship of the early 20th century, long and cylindrical in shape and with a rigid framework. It is from the name of Ferdinand Adolf Heinrich August Graf von Zeppelin (1838-1917), German general and aircraft manufacturer, who designed airships of this kind.

Zeppelins were used for reconnaissance and bombing during the First World War, and as passenger transports both briefly before the war and then until the outbreak of the Second World War in 1939.

In English, Zeppelin soon became a slang appellation for sausage (cf. also banger), usually in the phrase Zeppelins in a cloud, and variants, meaning sausage and mash.

In the chapter London in War Time of After Dark in the War Capitals (New York, 1916), the American journalist and author Karl Kingsley Kitchen (1885-1935) explained the significance that the phrase had to Londoners:

Among the working classes there is great contempt for the Zepps. Of course much of this is bravado but a surprisingly large number of people believe it is their duty to disregard Germany’s efforts to strike terror in their hearts. They make many jokes at the kaiser’s expense and one of the most popular dishes in the restaurants is “Two Zepps and a stack of clouds”—sausages and mashed potatoes.

On 17th March 1915, The Tatler (London) published War Parlance, a drawing by Fred Buchanan, with the following caption: 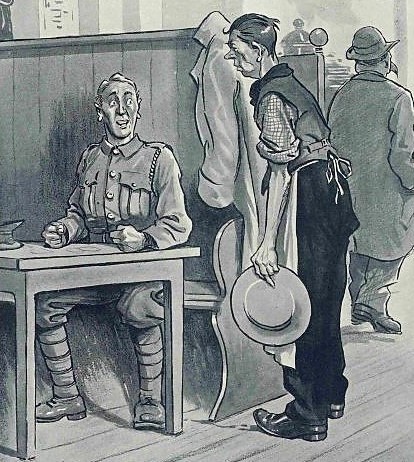 Aircraft Expert (whose fancy dictates sausages and mashed): Now then, Charlie, come on, pop about! Two Zepps an’ a cloud!

However, the phrase had been used since before World War One; on 18th September 1909, The Arrow (Sydney, New South Wales, Australia) had published the following:

Our Friend, Jerry Tompkins, leisurely took a seat in the Signor’s refreshment-house.
“Yessair?” inquired the waiter hurrying up.
“H’m!” grunted Jerry glancing down the bill of fare. “Let me see—toad-’n-hole, bubble-’n-squeak; let me see. H’m! give me two sausages and mashed, waiter, and plenty of gravy.”
“Ver’ good sair!”
The polite waiter applied himself to the speaking tube: “Two Zeppelin airships on a cloud!” he bellowed down, “and make zem rainy!”—W. R. Ames, Essex-street, Gordon.