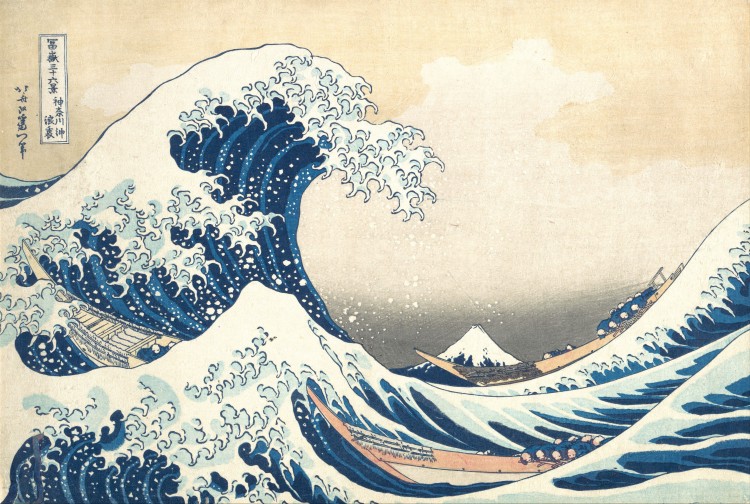 The term sea change denotes a profound or notable transformation.

It originated in The Tempest (Folio 1, 1623), by the English poet and playwright William Shakespeare (1564-1616), where it designates a change brought about by the action of the sea; in Act 1, scene 2, Ferdinand hears Ariel, an airy spirit, sing a song deceiving him into believing that his father, Alonso, King of Naples, has drowned in the shipwreck:

Ariell Song.
Full fadom fiue thy Father lies,
Of his bones are Corrall made:
Those are pearles that were his eies,
Nothing of him that doth fade,
But doth suffer a Sea-change
Into something rich, & strange:
Sea-Nimphs hourly ring his knell.
Burthen [see note]: ding dong.
Harke now I heare them, ding-dong bell.
– Ferdinand. The Ditty do’s remember my drown’d father,
This is no mortall busines, nor no sound
That the earth owes: I heare it now aboue me.

In A Concise Dictionary of Phrase and Fable (1993), B. A. Phythian remarked, about The Tempest:

This sea change, a mysterious transformation into rich or rare substances of the sea, is a metaphor of redemption through death, one of the great themes of the play, and it is unfortunate that the modern use of the term has become so debased.

The earliest instance of sea change in its current sense and without allusion to Shakespeare’s use that I have found is from Stenographic Glimpses of Congress, by ‘Reis Effendi’, published in The Boston Morning Post (Boston, Massachusetts) of 20th December 1833:

Washington, Dec. 13, 1833.
[…]
I saw Mr Wheaton, our late Charge d’Affaires at Denmark, in the House to-day. He is as slim as a “unit;” dark hair and eyes; an animated countenance, with a contour visage somewhat like Randolph’s, as I am told. His appearance indicates that he has undergone a “sea change.” It is not known whether he wishes or expects employment abroad again.

Note: In this passage, burthen is to be understood as both burden, a heavy load, and the etymologically unrelated bourdon meaning the bass or undersong accompanying the melody in a choral work. Very early, bourdon was confused with burden apparently from the notion of the bass or undersong being ‘heavier’ than the air. The bourdon usually continued when the singer of the air paused at the end of a stanza, and was usually sung to words forming a refrain, being often taken up in chorus, so that burden was extended to refer to the refrain or chorus itself. And since the undersong was thought to be ‘heavier’ than the air, the vocal chorus were said to ‘bear the burden’ of a song, as though carrying the weight of it. Moreover, because the refrain often expresses the pervading sentiment or thought of a poem, burden also came to mean that which is ‘carried’ by the poem, its gist or essential contents.

As Grace Tiffany writes in the Evans Shakespeare Edition of The Tempest (2011), the funeral bell that concludes Ariel’s song constitutes its ‘burden’ as a refrain or undersong whose deep notes match the watery depths of Alonso’s supposed tomb and the emotional depths of his son’s grief, thereby concentrating the meaning of the entire lyric and the scene of mourning on which it comments. “The ditty,” responds Ferdinand (using a word that could mean ‘burden’ or ‘theme’, as well as ‘the words of a song’) “does remember my drown’d father.”

In 1917, the American poet Ezra Pound (1885-1972) alluded to Full Fathom Five, Ariel’s song, in the second of Three Cantos of a poem of some length; here, the canto has turned to the story of El Cid:

Cid from Bivar, from empty perches of dispersed hawks,
From empty presses,
Came riding with his company up the great hill
(Afe Minaya!) to Burgos in the Spring,
And thence to fighting, to down-throw of Moors
And to Valencia rode he. By the beard! Muy velida!
Of onrush of lances, of splintered staves
Riven and broken casques, dismantled castles;
Of painted shields split up, blazons hacked off,
Piled men and bloody rivers. Or
“Of sombre light upon reflected armour”
When De las Nieblas sails —
“Y dar nueva lumbre las armas y hierros” —
And portents in the wind, a pressing air;
Full many a fathomed sea-change in the eyes
That sought with him the salt sea victories,
Rumble of balladist.