an early pun on the phrase – advertisement published in the Burnley Express and Burnley News (Burnley, Lancashire) of 21st October 1939: 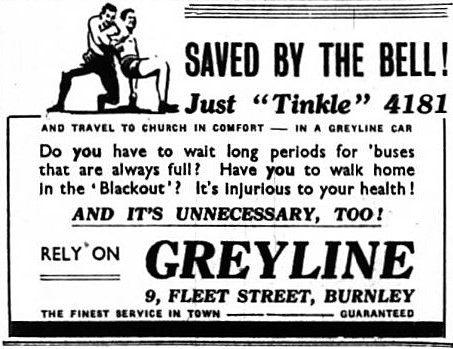 SAVED BY THE BELL!
Just “Tinkle” 4181
AND TRAVEL TO CHURCH IN COMFORT — IN A GREYLINE CAR
Do you have to wait long periods for ’buses that are always full? Have you to walk home in the ‘Blackout’? It’s injurious to your health!
AND IT’S UNNECESSARY, TOO!
RELY ON GREYLINE
9, FLEET STREET, BURNLEY
THE FINEST SERVICE IN TOWN ——— GUARANTEED

In boxing, to be saved by the bell means to be saved from being counted out by the ringing of the bell at the end of a round. The American sportswriter Leonard Koppett (1923-2003) explained it in The New York Times guide to spectator sports (New York, 1971):

If a man is knocked down in the closing seconds of a round, so that the bell rings ending the round before the count of 10 has been reached, he can be “saved by the bell.” As long as he is ready to start the next round, he may have been actually unconscious for many seconds into the rest period, without penalty (some governing bodies have modified that rule so that the count over a knocked-down fighter is continued when a bell ends any round except the last). But any time he can’t respond to the bell starting the next round, it is a TKO [= technical knockout] as of the previous round (if he can’t come out for the seventh, he was knocked out in the sixth).

On 22nd February 1911, The Daily News (London) gave an account of “the fight between Sam Langford, of Boston, and Bill Lang, of Melbourne” that had taken place at the Olympia Annexe the night before:

In the fifth round Lang went down to a heavy right on the point, and was down for nine seconds. Further blows followed, and once again Lang was down for a count of nine. He was saved only by the bell, which announced the end of the round.

Figuratively, to be saved by the bell means to be rescued from a difficult situation by a timely intervention.

I have found an early instance of this figurative use in The Western Morning News (Plymouth, Devon) of 24th November 1942, which published an article about an invasion exercise, aimed at testing the Civil Defence forces, held at Torbay over the previous week-end:

Just before the exercise was due to end a section of the enemy turned their vehicles in Fleet-street, Torquay, by the General Post Office, and made a road block, whereupon a fierce battle developed, the British troops meeting a fusillade of fire. Finally they rushed the enemy and overcame him.
The enemy later reformed and repeated this manœuvre in the Babbacombe district, but just as a fierce encounter seemed likely to develop both sides were “saved by the bell,” and “Cease fire” was given.

In Find The Missing Link Between Work And Play, published in the Derby Evening Telegraph (Derby, Derbyshire) of 13th March 1947, Charles Mann likened the bell used in a boxing match to the bell signalling the end of a day’s work — an association aided by the verb punch in the phrase to punch the (time) clock, meaning to clock in or out:

There seems to me to be an urgent need for a stronger liaison between work and play.
An important link is missing in many people’s lives, I feel, because when the clock is punched at the end of a day’s work, the ring of the bell is like the signal for the end of a round in a fight with an enemy.
When the time card is stamped it should read “Work ended, welfare begun,” and the worker should be saved by the bell from aimlessness and apathy. There should then begin a system which enables the worker to take part with zest in leisure-time pursuits, run by an organisation which creates a friendly attitude towards the place in which he spends his working hours.

The equivalent French phrase is être sauvé par le gong. The earliest instance that I have found is from L’Action française (Paris) of 27th March 1911 in an account of the match that had pitted the French boxer Georges Carpentier (1894-1975) against the English boxer Jack Meekins (1880-1950) the previous Saturday (incidentally, Sam Langford, one of the boxers mentioned by The Daily News on 22nd February of that year, was also competing that day at the Wonderland, in Paris):

Au cinquième round, Meekins tombe de nouveau. Il se relève de suite. Il « encaisse » admirablement. Aux huitième et neuvième reprises, nouvelles chutes, plus graves celles-là. Chaque fois il est sauvé par le gong.
translation:
In the fifth round, Meekins falls again. He gets up at once. He “takes the beating” admirably. In the eighth and ninth rounds, new falls, those ones more serious. Each time he is saved by the bell.