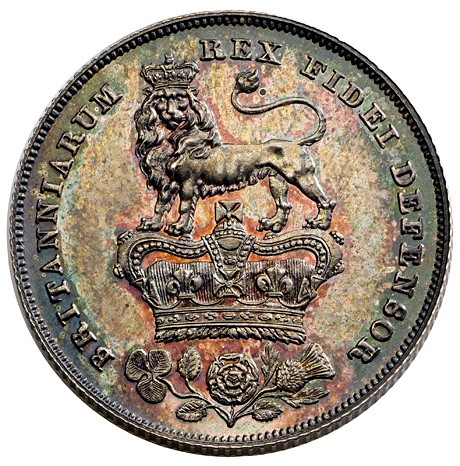 After getting that first shilling, of which I told you, I set my mind greatly upon getting a pile of new “lion shillings,” as I called them—the lion standing on the top of the crown; and my delight in the bloomy surface of their dead silver is quite a memorable joy to me.

from Pearls for Young Ladies (New York and Boston, 1878)

The phrase to take the shilling, or to take the King’s, or Queen’s, shilling, means to sign up as a soldier, from the former practice of giving a shilling to a recruit when he enlisted.

This phrase is first recorded in a note dated 27th March 1707, as published in Remarks and Collections of Thomas Hearne¹ (Oxford Historical Society – Oxford, 1886):

It is true that, being unhappily engaged in mad company, he did take a shilling, but not with any intent of listing. Hopes to get out of the difficulty.

The earliest instance of the King’s shilling that I have found is from The Dublin Evening Post (Dublin, Ireland) of 5th June 1828, which was quoting a “Galway paper”:

It appears that a military party had been beating up for recruits, during the day, in our streets. One of the Serjeants [sic], or a Corporal (we know not which) was seen about six o’clock in the evening, at the corner of Cross-street, having a young fellow from the country, whom he claimed as his Recruit. The poor fellow was unwilling to join his Majesty’s service, but the Serjeant or Corporal, assisted by two other Serjeants and a Drummer, were hurrying him on to the Mayor and Magistrates office, with their swords and bayonets drawn, when a mob of country people took part with the alledged [sic] recruit, when a “Slating” of no ordinary character ensued. Sticks and stones and green feathers flew aloft, and the heros [sic] of Waterloo and Badajos were obliged to resign their laurels to poor Patrick. The young man protested most strongly, that the King’s shilling was forced upon him—if so, we cannot sufficiently condemn the proceeding.

The earliest instance of the Queen’s shilling that I have found is from The Westmorland Gazette and Kendal Advertiser (Kendal, Westmorland) of 3rd February 1838:

Military Deserter.—A person calling himself Alexander Brown, from Scotland, was this day brought up and examined. He arrived on Saturday in Kendal, and delivered himself up to one of our police officers as a deserter from two corps. It appears he had enlisted, first, in the 64th regiment, at Dundee, taken French leave, and marched as far as Carlisle. In this city Sawney² took the Queen’s shilling a second time, from a “dashing white sergeant” or corporal (no matter which) of the regiment, gave them the slip, and came to Kendal. He was committed to the House of Correction here until means be taken by the military depot at Leeds for his future disposal.

(² Sawney is a derisive nickname for a Scotchman, representing a Scottish local variant of Sandy, short for Alexander.)

The practice of giving new recruits a shilling ended in 1879; on 8th March, the Buckingham Advertiser and Free Press for Buckinghamshire, Northamptonshire, Oxfordshire, and Bedfordshire (Buckingham, Buckinghamshire) explained:

There have been from time to time rumours that the military authorities intended to abolish the ceremonial custom of presenting a man who enlists in the Army with the sum of twelvepence sterling, the receipt of the coin known as the Queen’s Shilling being held to bind the bargain between the person enlisting and the recruiting officer. It was not, however, until Thursday last that Colonel Stanley, in moving for leave to bring in the Army Discipline and Regulation Bill, definitely announced the intention of the framers of the measure to abrogate a curiously traditional practice. From time immemorial, the Secretary for War remarked, enlistment had been considered to be effected by the passage of pieces of money, usually a shilling, from the hand of the recruiter to that of the recruit, who, it was admitted, was very frequently, at the moment of his accepting the Royal bounty, not precisely either in a mental or physical condition to know what he was about. Benevolently bearing this contingency in mind, a clause in the Mutiny Act provided that a period of not less than twenty-four, but not more than ninety-six hours should be allowed for the recruit to think better of the bargain he had made. If he repented of it he might annul the compact he had entered into by paying to the recruiting officer the sum of twenty-one shillings as ‘smart money,’ together with the amount which had been laid out on his subsistence since the time of his enlisting; but if he was not provided with the necessary funds he was held to have duly enlisted, and was carried before a magistrate to be attested. If he refused—having received the enlisting money—to take the oath of allegiance and fidelity, he was liable to punishment. It is Colonel Stanley’s opinion that in these days, our recruits are, for the most part, ‘pretty wide awake’ and that, as the attestation made the real enlistment and definitely effected the contract for service, he saw no reason why the enlistment shilling should not be done away with. He thought that this proposal would, if adopted, have the effect of preventing much that was discreditable at the very outset of the soldier’s career, and which was the fault not so much of the men as of the system, which, as hitherto administered, left a recruit, after he had once taken the shilling, open to all kinds of degrading influences until the time arrived for him to be legally attested. As things stood at present, an attested recruit could only obtain release from his contract as an indulgence, and on payment to the Government of about twenty-one pounds; but the new Bill would give him the right, as distinguished from the privilege, to rescind his contract at any time within three months of his attestation on payment of about ten pounds, which, it was calculated, would practically cover the expense to which the country had been put on his account.
Lovers of old fashions may regret the proximate disappearance of the Queen’s Shilling, which is in substance only the old English ‘earnest,’ the French ‘arrhes,’ the Italian ‘buonamano,’ and the Greek ‘arrabon.’ The custom of binding a bargain by the payment of a small sum on account is as old as the hills. In Paris, on hiring an apartment, five francs is generally given to the concierge as the ‘denier à Dieu;’ servants receive ‘arrhes’ on their wages when they are engaged; but in Italy, when a contract is made for hiring a carriage by the day or the week, the employed instead of the employer pays earnest money. The vetturino hands to the traveller a small sum, usually five lire, as an earnest that he, the driver, will furnish a proper vehicle and horse, and in all respects perform his agreement faithfully. As for the traveller, it is politely considered that his word is his bond. Foreigners, however, are generally sober when they make bargains, and that the receipt of the enlisting shilling should not be regarded as definitively binding in the case of an ignorant young fellow, who had possibly had the fatal coin slipped into his hand when more than half tipsy by a very ‘wide-awake’ sergeant, was virtually recognised by the enactment of the 89th or ‘relief’ clause of the Mutiny Act. The final abolition of the Queen’s Shilling affords, on the other hand, a very gratifying proof that the Government desire to deal justly with the private soldier, and to ameliorate his condition. . . . Engagement to serve the Queen as a soldier will now become a thoroughly business transaction, into which the recruit will enter with his eyes open, and from which he can release himself within a reasonable lapse of time without a virtually ruinous penalty being exacted from him.

On 25th March of the same year, The Globe and Traveller (London) offered a historical viewpoint:

Among other reforms contemplated in the new Army Discipline and Regulation Bill is the abolition of that time-honoured institution, “the Queen’s Shilling.” This institution came into existence, according to a military contemporary, in the reign of Charles II., who enacted that “each man who enlisted for a Foote Souldier should have a shilling given to him a Corporall as ‘earnest’ money.” It was further directed that the recruit “should then be provided with a sword and a musquet, with a collar of bandaliers, the barrels of which musket to be four foote long, and to conteine a bullet, fourteen of which shall weigh a pound weighe.” The object would appear to have been of a two-fold nature, the recruit binding himself in a contract of service by accepting the money of the State while the enlisting sergeant or corporal was under compulsion to take a good look at his man before sealing the bargain. For if it subsequently proved, before attestation, that the recruit was physically or mentally unfit to serve as a soldier, the non-commissioned officer had to make good the shilling to the State. As a rule, the “handsel” was spent in drink on the spot, the company toasting the soldier at his own expense so far as the money would go. But when the coin chanced to be a “lion shilling,” the prescriptions of the service ordained that it was to be kept for luck, and Sergeant Kite³ accordingly had to go without the liquor for which he longed. Under the new system, that worthy will have to long in vain for those pleasant treats. Instead of a shilling, a recruit will receive a notice, directing him to appear before some named justice of the peace at a given time. If he does not choose to do so, there is an end of the matter; if he does, he will be asked whether he is still of a mind to serve in the army. Should he repent at the last moment, he may walk off without penalty or punishment; but if he answers in the affirmative, the magistrate will thereupon attest him in regular form, and the man becomes a member of her Majesty’s regular forces. Even then, however, there is a chance allowed to unstable minds, for any recruit may claim his discharge within three months after attestation on paying £10 or thereabouts. The precise sum is to be that which will cover all the expenses to which the State has been put in consequence of his vacillation, and this is estimated at £10 in the average of such cases. Except Sergeant Kite, few will regret the abolition of the “Queen’s Shilling” which had become an obsolete institution productive of no good and not a little harm.