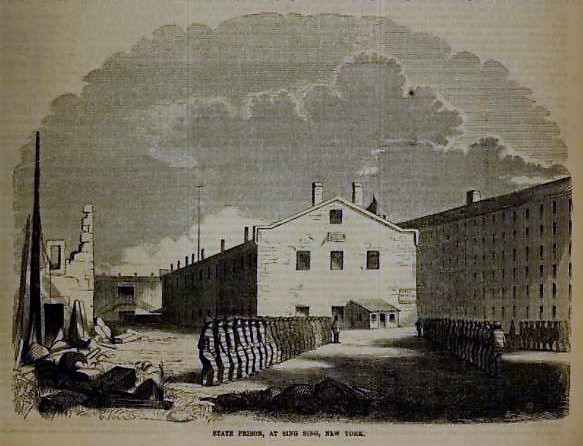 The engraving shows the interior of the prison-yard at Sing Sing, New York, with the convicts marching to supper in lock-step. After the abandonment of the solitary system of imprisonment at Auburn, the prison at Sing Sing was erected, under authority of an act of the legislature passed in March, 1824. The work of building was commenced May 14, 1826, and the prison was completed in 1829, with 800 cells. The increase of convicts rendered an addition necessary, and this was completed in 1831. A large building for female convicts was erected to the east of the main prison in 1837. The Mount Pleasant prison at Sing Sing is 33 miles from the city of New York. It is built on the eastern shore of the Hudson, and stands 10 or 12 feet above high water mark. The grounds of the prison comprise 130 acres. The main prison for males is 480 feet long, and 44 wide. The building is 5 stories high, and contains 100 cells in each story. The cells are each 7 feet long, 7 feet high, and 3 1-2 feet wide, well lighted, warmed and ventilated. The space in front of the cells forms a perfect whispering gallery, so that a guard in the area can hear the slightest noise in the remotest cell. Two buildings two stories high and forty feet wide, used as workshops, enclose the western yard, which runs to the water’s edge. There are five workshop buildings, and another building which comprises the kitchen, mess-room, chapel and hospital. There are several coopers’ shops, and shops attached to the lime-kiln north of the main building. The guard-house is on the height at the east side of the prison and west of the female prison, about 170 feet above the level of the yard. The Hudson River Railroad runs through an arch in the east yard, 60 feet from the main building.

Of American-English origin, the phrase to send up the river means to send to prison.

It originally referred to Sing Sing prison, situated up the Hudson River from the city of New York. In The Life and Adventures, Songs, Services, and Speeches of Private Miles O’Reilly (47th Regiment, New York Volunteers), published in New York in 1864, the Irish journalist and author Charles Graham Halpine (1829-68) punned on the phrase. He made an orator declare, about the city of New York, that

it was not necessary to dwell upon the very complex system of “strings” and “wires” by which the whole city was dominated from the City Hall. (Hear, hear.) They all understood it. They were all growing rich by it, and would yet grow richer. (Loud applause.) He would call their attention, however, to the masterstroke of the whole machine. The cable of four thicker and seventeen thinner strands, connecting the network of the City Government with Albany, was typical of the part played in the construction and management of this mechanism by the majority of Senatorial and Assembly representatives who had been sent from Manhattan Island to Albany during the last half dozen years. […] He hoped this year that they might be enabled to send up the river—he did not mean to Sing Sing, but to Albany—four Senators and seventeen Assemblymen of the best possible stripe.

Thomas McGuire, a watchman, employed about the wharves on the East River at the foot of Gouverneur-slip, and who has been a terror to the river thieves in the neighborhood, was shot yesterday morning, and, it is believed, mortally wounded, by a man named Perry, during a quarrel at the corner of South-street and Gouverneur-slip. Perry, who escaped, is classed by the Police as a river thief, and a member of the notorious “Hook” and “Border” gangs of thieves and ruffians […].
From what could be learned of the events preceding the shooting of McGuire, it appears that he had been in company with Perry and one Waldron, also a member of the “Hook” gang during Tuesday night and again yesterday morning. They had induced him to drink freely in making a tour of the low grog-shops along the river front […]. They were all intoxicated and boisterous in their manner. McGuire, who was apparently much more intoxicated than either of his companions, was boasting about sending Conroy and Calderan to State Prison, and swore, with a fearful oath, that he would “send up the river” all the river thieves he knew.