The phrase to walk (one’s) chalk(s) means to go away, to be off.

It originally referred to a procedure consisting in making a person walk on a straight line drawn with chalk in order to establish whether he or she is inebriated. Notes and Queries (London) of 14th April 1860 published the following letter from a correspondent signing themself T. E. S.:

‘Walk your Chalks.’ A very simple explanation of this expression may be given. I believe that certain ale-house frequenters, when they have been drinking long enough to make a boast of being sober, and to dispute the point with each other, will chalk a long straight line on the ground, and then endeavour one after the other to walk upon it without swerving to the right or left. Those who succeed are adjudged to be sober, i.e. to have “walked their chalks.”
A witness on a trial in Buckinghamshire, about the year 1841, made use of this expression, and a barrister immediately explained it in the above manner to the puzzled court.
Addressed to a person whose company is no longer desired […], the expression “walk your chalks” would thus mean, “walk straight off.”

Whether this was really a practice among “certain ale-house frequenters” is not known but the following from The Illustrated Sporting and Dramatic News (London) of 2nd December 1876 shows that the test did exist:

“At the Mansion House on Wednesday, a cabman named Russell, who was charged with being drunk and incapable of taking care of his horse and cab denied the charge. He said: ‘At the police-station I said to the inspector, “Now chalk a mark along the floor. If I’m drunk I can’t walk it.” A drunken man, your worship, can’t walk a chalk line.’ The defendant, the reporter says, amid much laughter, imitated the swerving of a drunken man in his attempt to walk the mark. Sir Robert Carden asked whether the police made a chalk mark. The defendant: ‘No; they wouldn’t.’ Sir Robert: ‘Then you did not have a fair trial?’ The defendant: ‘I did not, your worship.’ Sir Robert said he had been a magistrate many years, and never heard such a test as that put before. He thought the inspector should have applied the test. The defendant: ‘Certainly he should.’ Sir Robert: ‘But perhaps they had no chalk.’ Defendant: ‘I offered to lend. them a pencil. Here it is. I put it down like that’ (suiting the action to the word). Sir Robert Carden said that as the defendant had had a good character for thirty years he would not then take it from him by fining him, and also, considering all the circumstances, he should remit the greenyard* fees. The defendant, however, must be careful in future.” Henceforward the phrase “walk your chalks” must be held to have a legal signification. If you can perform that operation, or even if you cannot, but have the presence of mind to demand its introduction, as a test of your sobriety, you are, in the opinion of sapient Sir Robert Carden, a straight-walking, and, therefore, a perfectly sober member of society.

(* green-yard: an enclosure for impounded animals and vehicles)

A similar phrase, to walk a, or the, crack, refers to making a person walk on a crack (i.e. a line between floor-boards) in order to establish whether he or she is intoxicated. I have found an early instance of both phrases in a story published in The Daily Picayune (New Orleans, Louisiana) of 10th February 1839:

“I’ve a sort of impression that you’re sprung [= intoxicated]. You’ve had too much tea, and too little water.”
“You hurt my feelings, and brush the blue off the delicate plum of my character by your insinuations. After to-morrow, I won’t touch a toddy, if it should cry for me to kiss it.”
“Well, you shan’t be tuck up [= hanged] on suspicion.—Can you walk a crack, foot to foot, twistified fashion?”
“If it wasn’t that I’m troubled in my mind, I’m sure I could. I know I can to-morrow, if you’ll step in after dinner, take off your things, bring your work, and stop to tea, as the gals say.”
“That will never do. Walk a crack, or you must walk your chalk before the mayor.” 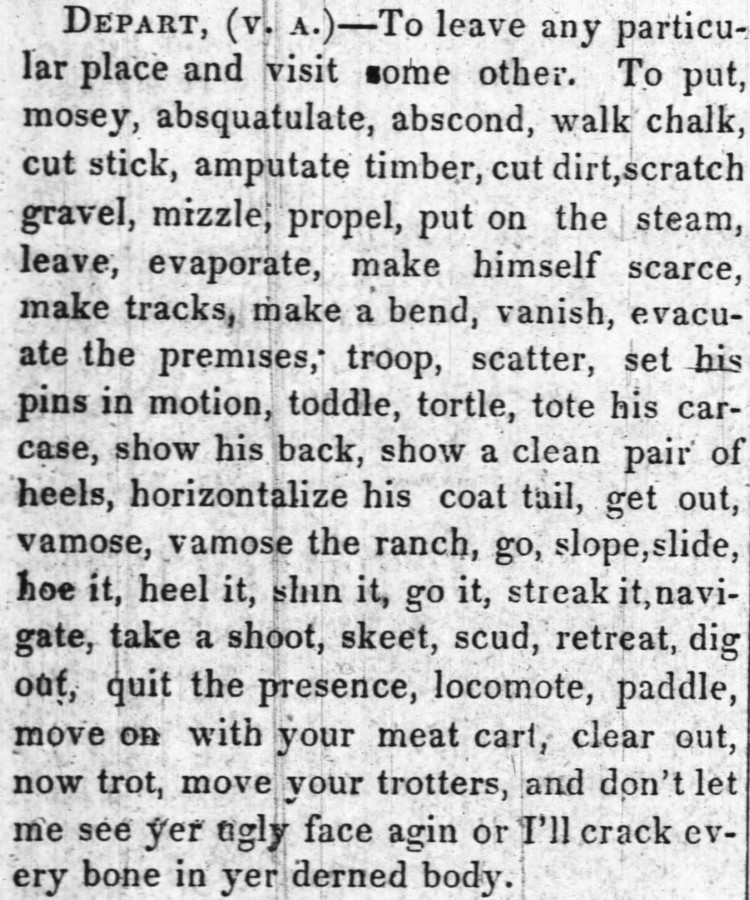 John Donkey is about to publish a Dictionary of Synonymes [sic]. From the proposed work he makes the following extract:
[…]
Depart, (v. a)—To leave any particular place and visit some other. To put, mosey, absquatulate, abscond, walk chalk, cut stick, amputate timber, cut dirt, scratch gravel, mizzle, propel, put on the steam, leave, evaporate, make himself scarce, make tracks, make a bend, vanish, evacuate the premises, troop, scatter, set his pins in motion, toddle, tortle, tote his carcase, show his back, show a clean pair of heels, horizontalize his coat tail, get out, vamose, vamose the ranch, go, slope, slide, hoe it, heel it, shin it, go it, streak it, navigate, take a shoot, skeet, scud, retreat, dig out, quit the presence, locomote, paddle, move on with your meat cart, clear out, now trot, move your trotters, and don’t let me see yer ugly face agin or I’ll crack every bone in yer derned body.