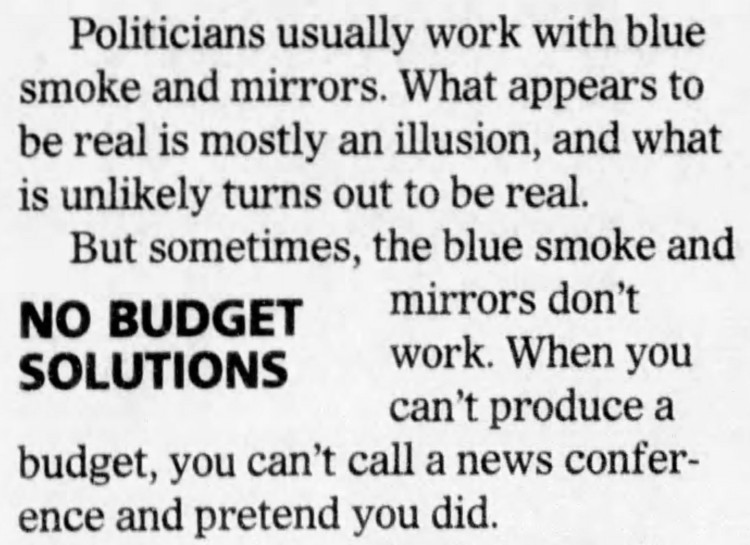 The phrase smoke and mirrors means irrelevant or misleading information serving to obscure the truth of a situation.

It refers to the illusion created by conjuring tricks, and originated in How the Good Guys Finally Won: Notes from an Impeachment Summer (New York, 1975), by the American political journalist and author James Earle ‘Jimmy’ Breslin (1928-2017). About House Speaker Tip O’Neill’s participation in the removal of Richard Nixon from the presidency, he wrote:

Tip O’Neill at all times has one great political weapon at his disposal. He understands so well that all political power is primarily an illusion. If people think you have power, then you have power. If people think you have no power, then you have no power. This is a great truth in politics that I was able to recognize in O’Neill’s ways, because I had taken the enormous trouble to go out and learn this in the streets and clubhouses of the City of New York and particularly as a candidate for citywide office in 1969, an adventure which left me with the deep-lasting scars of one who went and learned the hard way, thus learning forever. For those who take their politics from a book, an easier but much less effective way of learning than mine, this same proposition has been advanced in print by Thomas Hobbes, who wrote in England in the 1600s: “The reputation of power is power.” Power is an illusion.
Illusion. Mirrors and blue smoke, beautiful blue smoke rolling over the surface of highly polished mirrors, first a thin veil of blue smoke, then a thick cloud that suddenly dissolves into wisps of blue smoke, the mirrors catching it all, bouncing it back and forth. If somebody tells you how to look, there can be seen in the smoke great, magnificent shapes, castles and kingdoms, and maybe they can be yours. All this becomes particularly dynamic when the person telling you where to look knows how to adjust the mirrors, tilt one forward, walk to the other side, and turn one on its base a few degrees to the right, suddenly causing the refractions to be different everywhere. And then going to the blue smoke, lessening it, intensifying it, and all the time keeping those watching transfixed, hoping, believing himself. Believing perhaps more than anybody else in the room. And at the same time knowing that what he is believing in is mirrors and blue smoke.
This is the game called politics and power as it is played in the Legion Halls and Elk Clubs and church basements and political clubhouses throughout the country, throughout the world, while men try to please and calm others in order to maintain and improve a public career.

The word smoke has long denoted a clouding or obscuring medium or influence. For example, in Thesaurus linguae Romanae & Britannicae (Thesaurus of the Roman Tongue and the British – London, 1578), the English theologian and bishop of Winchester Thomas Cooper (circa 1517-1594) wrote:

Verborum & argutiarum fuliginem ob oculos audientium iácere.
To speake obscurely: to cast a darke smoke or mist before their eyes.

In Vocabulum; or, The Rogue’s Lexicon (New York, 1859), George Washington Matsell (1811-77), who was the first New York City Police Commissioner, defined smoke as:

Humbug; any thing said to conceal the true sentiment of the talker; to cover the intent.

And all done with mirrors indicates that something is performed by some explicable means, not by magic; in Mystery Mile (London, 1930), the English author of detective fiction Margery Louise Allingham (1904-66) wrote:

The magician began with one or two sleight-of-hand tricks, presenting each illusion with a topical patter.
‘Very clever. Very clever,’ murmured Mr Barber in his stentorian undertone. ‘They say those tricks are handed down from generation to generation. I think it’s all done with mirrors myself.’

In his review of How the Good Guys Finally Won, titled Breslin Wanders In Corridors Of Power, published in the Detroit Free Press (Detroit, Michigan) of 18th May 1975, James Harper was very critical and turned mirrors and blue smoke against Breslin:

When Breslin writes at length of the insidious role lawyers have played in politics, he is tedious.
When he starts talking about the illusion of power—“…Mirrors and blue smoke, beautiful blue smoke rolling over the surface of highly polished mirrors, first a thin veil of blue smoke, then a thick cloud that suddenly dissolves into wisps of blue smoke, the mirrors catching it all, bouncing it back and forth…”—he is tedious and obscure.
A cheap shot here would be to say Breslin is using mirrors and blue smoke to create the illusion of important literature. A better way is to say there is no story; this is no book.

However, Breslin’s phrase soon gained currency in the reversed form blue smoke and mirrors. The earliest instance that I have found is from Political Pros Still Have Muscle, by Ray Holton, published in The Philadelphia Inquirer (Philadelphia, Pennsylvania) of 20th July 1975:

Jimmy Breslin, the writer, compares professional politicians with wizards and magicians […].
Their tools are “mirrors and blue smoke,” Breslin says, because politics is an art of deception.
In New Jersey, the masters of the art are the county chairmen of both major political parties.
Although the chairmen have no formal role recognized by law, the blue smoke and mirrors are moving again as the bosses begin thinking about the selection of delegates to the national party conventions for the summer of 1976.

Leon N. Weiner, president of the National Housing Conference […] said the homebuilding industry’s present plight results from a deliberate federal policy of cutting housing starts to curb inflation. Most drastically cut has been housing for low and middle income families, said Weiner, charging that the federal programs seem to be composed of “blue smoke and mirrors.”

I have found an early occurrence of the current form smoke and mirrors. On 1st September 1976, John Bennett Johnston (born 1932), chairman of the Senate Interior subcommittee on parks and recreation, criticised President Ford’s proposal to create eleven new national parks and six new wildlife refuges. Via Associated Press, several newspapers reported what he said; for example, The Iola Register (Iola, Kansas) of the same day in an article titled Ford blasted for lateness of park plan:

“The issue here is whether this legislation, in fact, constitutes a bold new initiative in outdoor recreation or whether it constitutes a political exercise calculated to deceive and to mislead the American people until after the election,” Johnston told Interior Secretary Thomas Kleppe, a witness.
Johnston said he hopes there is “substance in this proposal—not just smoke and mirrors. But the evidence of hypocrisy is strong.”

The author of Clarke Reed’s legacy, published in the Delta Democrat-Times (Greenville, Mississippi) of 15th February 1976, used the form mirrors and smoke. He writes that “Clarke Reed has announced he will not seek re-election as chairman of the Mississippi Republican Party, thereby ending a 10-year stewardship”, and, about “the disproportionately strong voice which the state GOP has had in national party affairs for much of the past 10 years”, he explains:

Indeed, Republicans in other parts of the country must have often wondered why the spokesman for one tiny unit in the overall party had so much clout, and in truth Reed often seemed to put it all together with mirrors and smoke.
But mirrors and smoke are part of the political process, a process Clarke Reed has mastered as few others in Mississippi or elsewhere.

On 21st March 1987, President Ronald Reagan (1911-2004) used smoke and mirrors, with its extended magician metaphor, in a radio address to the Nation on budget reform:

The budget process is, indeed, a sorry spectacle: deadlines delayed or missed completely, huge continuing resolutions that camouflage the worst kind of special interest spending. Budget process? It’s more like a magic show. It’s wink and blink and smoke and mirrors and pulling rabbits out of hats, but almost all that ever comes up are designs to hide increases for the special interests.