The colloquial phrases you ain’t seen nothing yet and you ain’t heard nothing yet are used to indicate that however extreme or impressive something may seem, it will be overshadowed by what is to come.

The latter phrase is generally said to have first appeared as the title and in the lyrics of a song by Al Jolson1 and Gus Kahn2 (music by Bud De Sylva3). Published in 1919 by Jerome H. Remick & Co. (Detroit & New York), You Ain’t Heard Nothing Yet was originally interpreted by Al Jolson.

The following is the beginning of the song: 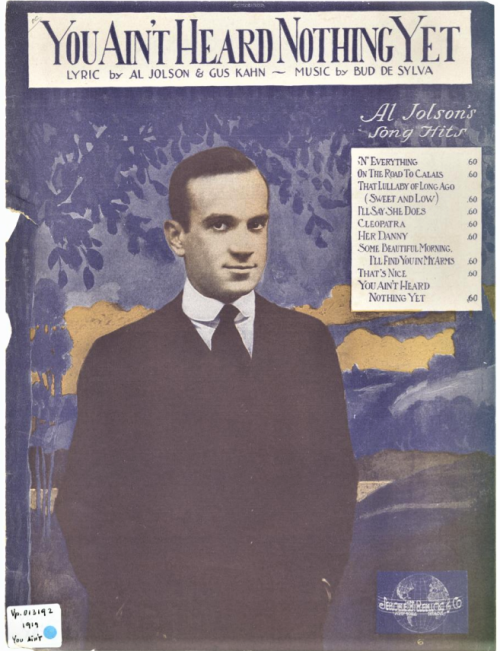 However, Al Jolson had used you ain’t heard nothing yet nearly three years before the song was published, as mentioned in the following from Jolson Scores in Winter Garden Show at the Teck, published in the Buffalo Evening Times (Buffalo, New York) of Tuesday 19th December 1916:

Frolicsome Al Jolson, entertainer extraordinary, who possesses the rare ability of producing ten laughs a second, is with us again, this time in his latest busical [sic] success, “Robinson Crusoe, Jr.” A capacity audience at the Teck Theater last night was kept in an uproar from the minute he appeared on the stage until the final curtain, and then the people did not seem to have enough. They applauded him time and again and the applause continued when Jolson, who felt right at home last night, told them “you ain’t heard nothing yet.”

The following early allusion to the song is from Connecticut’s Most Artistic Soul—C. M. P. Huska, published in The Hartford Courant (Hartford, Connecticut) of Sunday 11th January 1920:

We accepted without any sign of disbelief his statement that he intended to go to New York this winter to fill a contract for making song records for phonographs and victrolas4, and we’re going to buy a record as soon as it comes out.
But, as the popular song says, “you ain’t heard nothing yet.” If you are at all interested in our “gentleman artist,” please keep your seats until the end of the performance.

4 Victrola — from the name of the Victor Talking Machine Co. and the suffix -ola — was the proprietary name of a kind of gramophone. (One of the earliest formations with this suffix in commercial use was Shinola.)

The earliest instance that I have found of you ain’t heard nothing yet used as an idiomatic expression is from Power of Spiritualism Being Revealed on the Campus: Mediums Walker and Vance Perform Marvelous Feats With This Unseen Power, published in The Davidsonian (Davidson College, Davidson, North Carolina) of Thursday 25th March 1920:

Davidson’s class in spiritualism is interesting the whole student body with tales told the morning after their nightly seances. Indeed it is remarkable to hear of a table knocking on the floor when fourteen hands are resting on it. But you ain’t heard nothing yet! By raps: 1 for A, 2 for B, 3 for C, etc.—words, sentences, yea prophecies and unknown facts are made known!

With one exception [cf. footnote], the earliest instances of you ain’t seen nothing yet are posterior to those of you ain’t heard nothing yet—which may indicate that the former phrase gained currency as an alteration of the latter.

The phrase you ain’t seen nothing yet appeared for example in Legion Minstrel Great Success, an account of “the minstrel given by the members of Seymour Post No. 89 of the American Legion at the Majestic theatre Monday night” published in the Seymour Daily Republican (Seymour, Indiana) of Tuesday 9th March 1920:

While Ed Brown sang “You Ain’t Seen Nothing Yet,” each member of the chorus danced across the stage in a spotlight which was an amusing feature of the act.

Another early instance is from Riverhead Claims Eastern Pennant: But Mattituck Is Coming Strong and Sag Harbor Continues a Contender, published in the Brooklyn Daily Eagle (Brooklyn, New York) of Monday 30th August 1920:

Riverhead, L. I., Aug. 30—“We’re getting away with it,” is the tuneful melody that Manager Ebbie Weir of the Riverhead Ball Club was singing Saturday night after his team had won another link in the race for the flag in the Eastern League, but Manager “Bill” Reeve, who seems to have inocculated [sic] his Mattituck team with some of the pep and strength of his corncob, chimes in with this little ditty: Well, you ain’t seen nothing yet.”

Note: I have found an isolated early instance of you ain’t seen nothing yet in an article about the third bicycle show at the Grand Central Palace, New York City, published in The Sun (New York City, N.Y.) of Sunday 14th February 1897; two visitors, “a very stout, short man and a very thin, tall woman”, are talking to each other:

“Ain’t it a great show?” said the man.
“’Tain’t so great as ’twas last year in the Garden,” she answered.
“Yes, ’tis, too, greater,” he contended; “it’s a heap higher. We’ve just come in on the main floor. Why, you ain’t seen nothing yet. This show is in stories—begins on the ground floor, where we are now, and rises up like the Washington monument.”