Australia—‘charity dame’ 1949—‘charity moll’ 1962—an amateur prostitute who charges less than the usual rate—from ‘Moll’, pet form of the female forename ‘Mary’, the noun ‘moll’ has long been used to designate a prostitute

originally a kind of horse chase in which the second horse had to follow the course of the leader, like a flight of wild geese

‘slipshod’: ‘characterised by a lack of care, thought or organisation’—formed after the obsolete noun ‘slip-shoe’ (= ‘a loosely fitting shoe or slipper’); ‘shod’ (meaning ‘wearing shoes’) is the past participle of the verb ‘shoe’

original meaning of ‘kidnap’, late 17th century—to steal or carry off children or others in order to provide servants or labourers for the American plantations 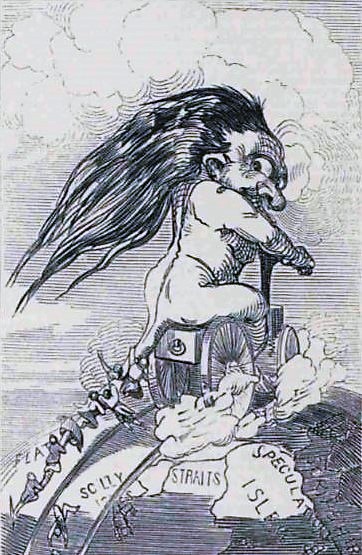 RAILWAY MANIA. WRITTEN AND ILLUSTRATED BY ALFRED CROWQUILL. Railway Speculation has become the sole object of the world—cupidity is aroused, and roguery shields itself under its name, as a more safe and rapid way of gaining its ends. Abroad as well as at home, has it proved the rallying point of all rascality—the honest […]

MEANINGS   – the last part of something, especially when regarded as less important or interesting – British, informal: a cigarette end   ORIGIN   The obsolete adjective flag, attested in the late 16th century, meant flabby, hanging down. It was either an onomatopoeic formation or, via Middle French flac, from Latin flaccus, of same […]