Most [but not all – note 1] of its uses stem from the speech that the British statesman Winston Churchill (1874-1965) delivered as Prime Minister to the House of Commons on Tuesday 18th June 1940—speech in which he mentioned in particular the successful evacuation of the British Expeditionary Force and other Allied troops from Dunkirk (cf. meaning and origin of the phrase ‘Dunkirk spirit’).

This is the conclusion of Churchill’s speech:

What General Weygand [note 2] called the “Battle of France” is over. I expect that the battle of Britain is about to begin. Upon this battle depends the survival of Christian civilisation. Upon it depends our own British life and the long continuity of our institutions and our Empire. The whole fury and might of the enemy must very soon be turned on us. Hitler knows that he will have to break us in this island or lose the war. If we can stand up to him all Europe may be free, and the life of the world may move forward into broad, sunlit uplands; but if we fail then the whole world, including the United States, and all that we have known and cared for, will sink into the abyss of a new dark age made more sinister, and perhaps more prolonged, by the lights of a perverted science. Let us therefore brace ourselves to our duty and so bear ourselves that if the British ​ Commonwealth and Empire lasts for a thousand years men will still say, “This was their finest hour.”

The British immediately adopted finest hour as a motto expressing their spirit of indomitability in the face of the enemy, as exemplified by two poems. One was published in the Market Harborough Advertiser and Midland Mail (Market Harborough, Leicestershire, England) of Friday 28th June 1940:

THE HOUR OF DESTINY.

Men pass to seeming nothingness
As puffs of wind, or specks of dust,
While to some hoped-for goal they press,
So oft betrayed by things they trust,
Scale heights which tempt their lustful eyes,
Enthrone their gods of pomp and power,
Proclaim as to each peak they rise—
“This is our finest hour.”

Some climb, as Moses did of old,
The distant promised land to view;
Theirs but the vision to behold,
No milk and honey as their due;
When seems the anguish of defeat
Would life’s most pleasant prospects sour,
As Moses, with his task complete—
Then is their finest hour.

As man to dust, so nations fall,
Pass from corruption to decay,
Time’s hand write epitaphs for all
To mark and read beside the way.
Would freemen greater glory give
To freedom, so earth share its dower,
The future serve, so freedom live—
Now is their finest hour.

Mock not the mention of the soul,
Scorn not the hope in which men die;
’Tis faith in some immortal goal
Which sets the price of freedom high;
As men prepare this price to pay
So none be slaves to despots’ power,
An Empire finds its soul this way
In this its Finest Hour.

The other poem was published in The Chester Chronicle and Cheshire and North Wales Advertiser (Chester, Cheshire, England) of Saturday 29th June 1940:

Britain, thy finest hour is come!
Quiet and steadfast stand thy sons,
Strong in the faith that right shall still prevail.
Still proudly floats thy banner o’er the seas;
Thy mighty fleets keep watch, and bring
The riches of thy Empire, so that thou
Can’st plenish till they overflow thine armouries,
And keep the foe at bay.
Still come thy sons from Colonies afar
Hastening with pride thine honour to uphold;
Free men, to fight ’neath Freedom’s flag for Freedom!
Aye, and aloft the battlefleets of air
Drive from thy shores the harbingers of Death,
And harry oft the evil dragon’s lair.
The outpost thou of Freedom, and a tower
Of strength! So then, fight on!
Alone? Nay, while there still are men
Who value Freedom more than life itself!
They still will stand beside thee, till at length
Justice and Peace shall reign once more
Upon this tortured Earth.

The phrase also appeared in the editorial published in The Wiltshire Times and Trowbridge Advertiser (Trowbridge, Wiltshire, England) of Saturday 29th June 1940:

We borrow a term from the U.S.A., claimed as the greatest of the Democracies, in order to invest it with a new meaning. An Ally has gone. A French Government, without constitutional authority, has sold France to the enemy and in the selling has not sought in any way whatsoever to safeguard the interests of her loyal Ally.
In splendid isolation we live the finest hour of our existence holding high and alone the remaining lamp of liberty in order that free men shall still walk the earth. Is our task too heavy for us? Of course not. If it were we never would have reached the position which we enjoy as the greatest Empire the world has ever known. What we have we hold, and Hitler, in the book which framed his war campaign, was compelled to pay us tribute and to refer to the indomitable spirit of the British people who never knew when they were beaten and always went on to finish what they began.

Those advertisements reminded the public that the countries of the British Empire were participating with Britain in the fight against Germany. For example, the advertisement published in The People of 1st December 1940:
– first evoked the landing of New-Zealand troops at Anzac Cove, on the Gallipoli peninsula, in Turkey, on Sunday 25th April 1915,
– then told how on Wednesday 13th December 1939 the New-Zealand cruiser Achilles forced the “Nazi pocket battleship” Admiral Graf Spee “to an ignoble end”,
– and concluded with this paragraph:

New Zealand, like the whole British Empire, has risen as one man to destroy Nazi despotism. Once again the New Zealanders guard the Near East, this time against Hitler’s “new order” of slavery, and after the war they will help to build a better world.

The advertisement proper was as follows in the same issue of The People:

This is the final part of the advertisement for Rinso, in The People of 1st December 1940: 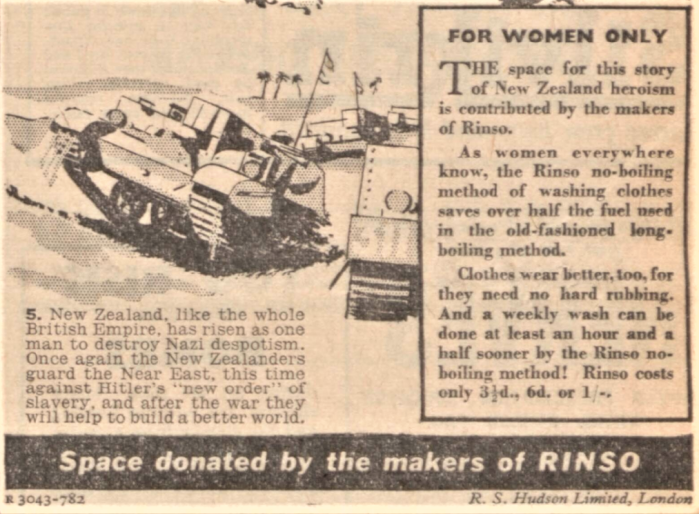 This cartoon by ‘Lee’ was published in the Evening Chronicle (Newcastle upon Tyne, Northumberland, England) of Friday 8th November 1940. Titled Wife Still Evacuated, it depicts a milkman saying to a man overwhelmed by the household cleaning chores:

“Cheer up, chum, remember this is your finest hour.” 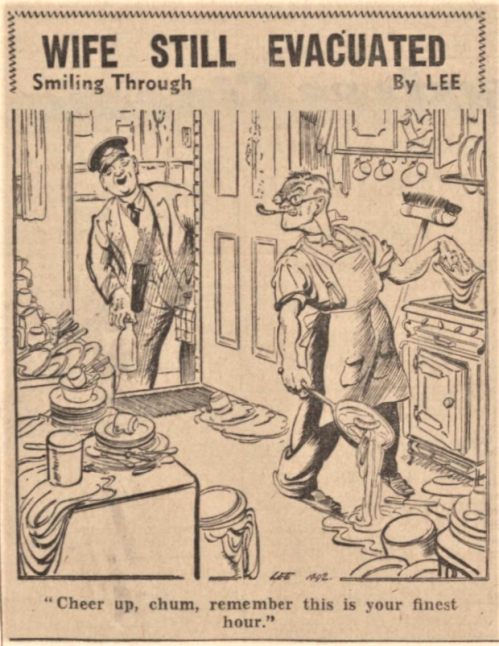 Note 1: For example, the use of finest hour is probably unrelated to Churchill’s speech in the following from the Daily Herald (London, England) of Thursday 15th August 1940—the English Anglican priest and poet Geoffrey Studdert Kennedy (1883–1929) was nicknamed Woodbine Willie during the First World War for handing out Woodbine cigarettes to soldiers:

Woodbine had a passionate zeal for social reform. He insisted on transmuting his faith into work for a New World. His four or five years as missioner [sic] of the Industrial Christian Fellowship were his finest hour.