The phrase to throw the baby out with the bathwater means to discard something valuable along with other things that are undesirable.

It is a loan translation from the German phrase das Kind mit dem Bade ausschütten, literally to empty out the child with the bath, first recorded in 1512. For example, in German Literature, translated from the German of Wolfgang Menzel1. By C. C. Felton2 (Boston, Massachusetts – 1840), the translator2 added the following note to this sentence:

Hengstenberg is intolerant, and throws away the wheat with the chaff.*
* Schüttet das Kind mit dem Bade aus; literally “empties out the baby with the bath.”—Transl.

The following explanations and illustration are from “(Don’t) Throw The Baby Out With The Bath Water”: The Americanization of a German Proverb and Proverbial Expression, by Wolfgang Mieder and Wayland D. Hand, published in Western Folklore (California Folklore Society – Claremont, California) of October 1991:

[The German phrase] had its first written occurrence in Thomas Murner’s (1475-1537) versified satirical book Narrenbeschwörung (1512), which contains as its eighty-first short chapter entitled “Das kindt mit dem bad vß schitten” (To throw the baby out with the bath water) a treatise on fools who by trying to rid themselves of a bad thing succeed in destroying whatever good there was as well. In seventy-six rhymed lines the proverbial phrase is repeated three times as a folkloric leitmotif, and there is also the first illustration of the expression as a woodcut depicting quite literally a woman who is pouring her baby out with the bath water […].

Murner also cites the phrase repeatedly in later works and this rather frequent use might be an indication that the proverbial expression was already in oral currency towards the end of the fifteenth century in Germany.

The Scottish historian and political philosopher Thomas Carlyle (1795-1881) elaborated on his own clumsy English translation of the German phrase in Occasional Discourse on the Nigger Question (London, 1853), when he argued that white people who hold black servants should make a commitment to them for life, since any shorter arrangement would appear to be abuse—in other words, he argued that the institution of slavery should be civilised and improved, but that the slaves themselves should not be given their freedom:

If the Black Gentleman is born to be a servant, and, in fact, is useful in God’s creation only as a servant, then let him hire not by the month, but by a very much longer term. That he be “hired for life,”—really here is the essence of the position he now holds! Consider that matter. All else is abuse in it, and this only is essence;—and the abuses must be cleared away. They must and shall! Yes; and the thing itself seems to offer (its abuses once cleared away) a possibility of the most precious kind for the Black man and for us. Servants hired for life, or by a contract for a long period, and not easily dissoluble; so and not otherwise would all reasonable mortals, Black and White, wish to hire and to be hired! I invite you to reflect on that; for you will find it true. And if true, it is important for us, in reference to this Negro Question and some others. The Germans say, “You must empty out the bathing-tub, but not the baby along with it.” Fling out your dirty water with all zeal, and set it careering down the kennels; but try if you can keep the little child!
How to abolish the abuses of slavery, and save the precious thing in it: alas, I do not pretend that this is easy, that it can be done in a day, or a single generation, or a single century: but I do surmise or perceive that it will, by straight methods or by circuitous, need to be done (not in the West Indian regions alone); and that the one way of helping the Negro at present (Distressed Needlewomen, &c., being quite out of our reach) were, by piously and strenuously beginning it. Begun it must be, I perceive; and carried on in all regions where servants are born and masters; and are not prepared to become Distressed Needlewomen or Demerara Niggers, but to live in some human manner with one another. And truly, my friends, with regard to this world-famous Nigger question,—which perhaps is louder than it is big, after all,—I would advise you to attack it on that side. Try against the dirty water, with an eye to save the baby! That will be a quite new point of attack; where, it seems to me, some real benefit and victory for the poor Negro, might before long, be accomplished; and something else than Demerara freedom (with its rum-bottle and no breeches,—‘baby’ quite gone down into the kennels!), or than American stump-oratory, with mutual exasperation fast rising to the desperate pitch, might be possible for philanthropic men and women of the Anglo-Saxon type.

The phrase was then used in The Dial: A Monthly Magazine for Literature, Philosophy and Religion (Cincinnati, Ohio) of February 1860; this magazine made the following comment on an article, titled On Prayer, published that month:

We do not, of course, hold ourself responsible for articles appearing in The Dial which we have not written; and if we take especial notice of any article, it is not because we endorse the rest, but because it has suggested some statements which we think important to the cause of truth. […]
The defect of the above article seems to us to be that, in the language of a homely German proverb, it throws out the baby with the bath.

In the following Peanuts cartoon, by Charles Monroe Schulz (1922-2000), published in the Herald and News (Klamath Falls, Oregon) of Sunday 18th October 1959, when Linus uses the phrase while talking to Charlie Brown, little Sally gets frightened, as she misses the figurative meaning of the expression and understands it as a direct threat to herself: 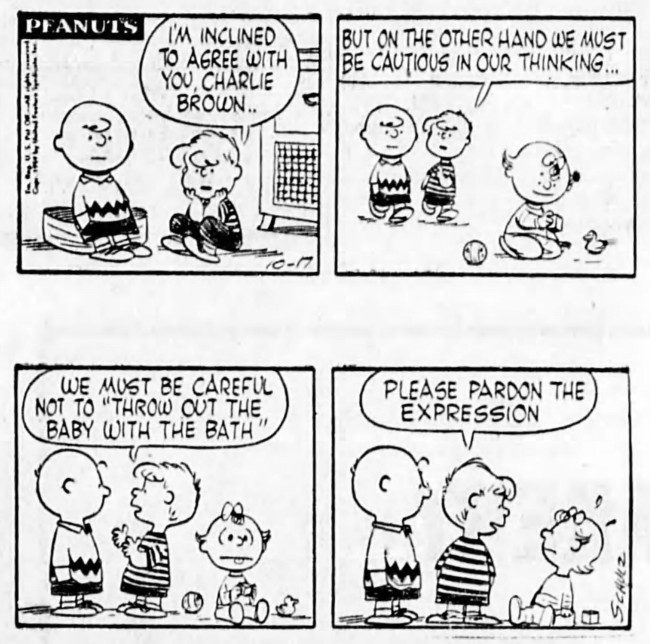 I’m inclined to agree with you, Charlie Brown…
But on the other hand we must be cautious in our thinking…
We must be careful not to “throw out the baby with the bath”
[turning to Sally] Please pardon the expression

The following political cartoon by Herblock (Herbert Lawrence Block – 1909-2001), published in The Sheboygan Press (Sheboygan, Wisconsin) of Wednesday 4th March 1981, alludes both to the phrase and to Ronald Reagan3’s ideas of a decentralised government. With the caption Everybody Ready For The Baby-And-Bathwater Toss?, this cartoon shows a member of the Reagan Team with a starting pistol lifted up high while three bureaucrats are ready—and eager—to throw three babies through the window, the three tubs being labelled Federal Regulations, Federal Programs, and Federal Agencies: 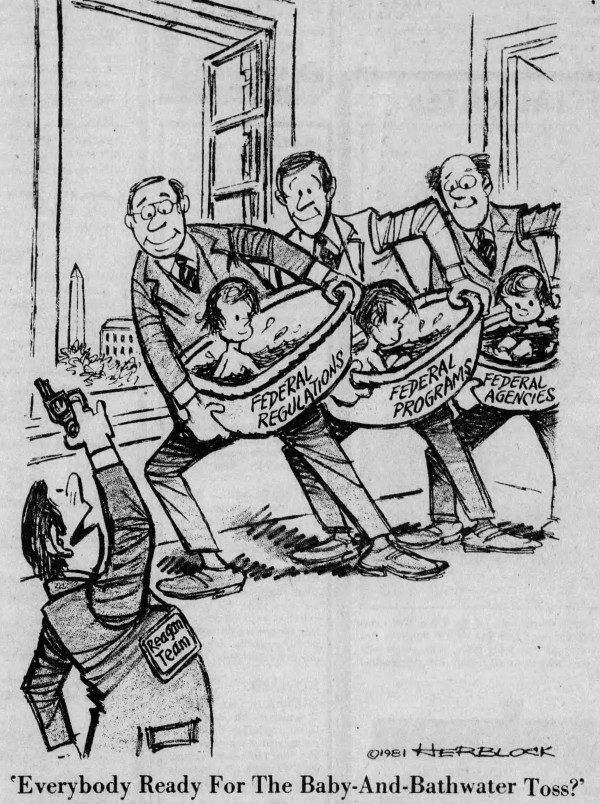 The phrase was borrowed into French as jeter le bébé avec l’eau du bain. It is likely to be a loan translation from the English version, for two reasons: British English and American English have a much greater influence on French than German has, and, had it been borrowed from German, enfant (translating the German noun Kind, meaning child) would probably have been used instead of bébé.

4 L’Express is a French weekly news magazine founded in 1953.