Nowadays, a curfew is a regulation requiring people to remain indoors between specified hours, typically at night – for example: a dusk-to-dawn curfew.

The word is from Old French and Anglo-Norman forms such as cuevre-feu and covrefeu, hence the Modern French word couvre-feu (plural couvre-feux), composed of:
– couvre, imperative of the verb couvrir, to cover,
– feu, meaning fire.

The word curfew originally denoted a regulation in force in medieval Europe by which fires were to be covered over or extinguished at a fixed hour in the evening, indicated by the ringing of a bell. It also denoted the hour of evening when this signal was given and the bell rung for the purpose.

The word came to denote the practice of ringing a bell at a fixed hour in the evening, usually 8 or 9 o’clock, continued after the original purpose was obsolete, and often used as a signal in connection with various municipal or communal regulations.

The primary purpose of the curfew seems to have been the prevention of conflagrations arising from domestic fires left unextinguished at night. However, the earliest Anglo-Norman and English quotations make no reference to the original sense of the word, the curfew being already in the 13th century merely a name for the ringing of the evening bell and the time so marked. For example, the following is from Statuta Civitatis Londonii (Statutes of the City of London – 1285), in Anglo-Norman:

Defendu est qe nul seit si hardi estre trove alaunt ne wacraunt par my les Ruwes de la Citee, apres Coeverfu persone a Seint Martyn le grant, a Espeye ne a Bokuyler ne a autre arme pur mal fere, ne dount mal supecion poet avenir; ne en autre manere nule, sil ne seit grant Seignour ou altre prodome de bone conysaunce, ou lour certeyn message qi de els serra garaunty qe vount li un a lautre pur conduyte de Lumere.
translation:
It is enjoined that none be so hardy to be found going or wandering about the streets of the City after curfew has finished tolling at St. Martin le Grand, with sword, or buckler, or other arms for doing mischief, or whereof evil suspicion might arise; nor any in any other manner, unless he be a great man or other lawful person of good repute, or their certain messenger, having their warrants to go from one to the other, with lantern in hand.

Neither does the first known use of curfew in English, in The husbande shut out, from The proces of the seuyn sages (circa 1320), refer to the original sense of the word:

Than was the lawe in Rome toun,
That, whether lord or garsoun,
That after corfu bi founde rominde,
Faste men scholden hem nimen and binde,
And kepen him til the sonne vprising.
translation:
Then was the law in the town of Rome,
That, whether master or boy servant,
That after curfew be found roaming,
Men should seize and bind him fast,
And keep him till the sunrise.

The curfew was in general use in medieval Europe. It has long been said that it was introduced into England by William the Conqueror as a measure of political repression, but this rests on no early historical evidence. For example, the Irish author Thomas Keightley (1789-1872) wrote, in The History of England (1839):

A law of police, which directed all fires to be put out at the tolling of a bell called the Curfew (Couvre feu) bell, is by later chroniclers ascribed to William, but without any countenance from the early writers.

It was an old tradition that, at the time of curfew, spirits were relieved from the confinement in which they were held during the day, and were permitted to wander at large till the first cock-crowing. The English poet and playwright William Shakespeare (1564-1616) mentioned this belief in several plays:

(Folio 1, 1623)
This is the foule Flibbertigibbet; hee begins at
Curfew, and walkes at first Cocke: Hee giues the Web
and the Pin, squints the eye, and makes the Hare-lippe;
Mildewes the white Wheate, and hurts the poore Crea-
ture of earth.

(Folio 1, 1623)
Ye Elues of hils, brooks, stãding lakes & groues,
And ye, that on the sands with printlesse foote
Doe chase the ebbing-Neptune, and doe flie him
When he comes backe: you demy-Puppets, that
By Moone-shine doe the greene sowre Ringlets make,
Whereof the Ewe not bites: and you, whose pastime
Is to make midnight-Mushrumps, that reioyce
To heare the solemne Curfewe.

– in The Tragicall Historie of Hamlet Prince of Denmarke (between 1599 and 1602), Horatio says:

(Quarto 1, 1603)
I haue heard
The Cocke, that is the trumpet to the morning,
Doth with his earely and shrill crowing throate,
Awake the god of day, and at his sound,
Whether in earth or ayre, in sea or fire,
The strauagant and erring spirite hies
To his confines.

The word curfew also denoted a cover for a fire, such as this one, made in the Netherlands in the 17th century: 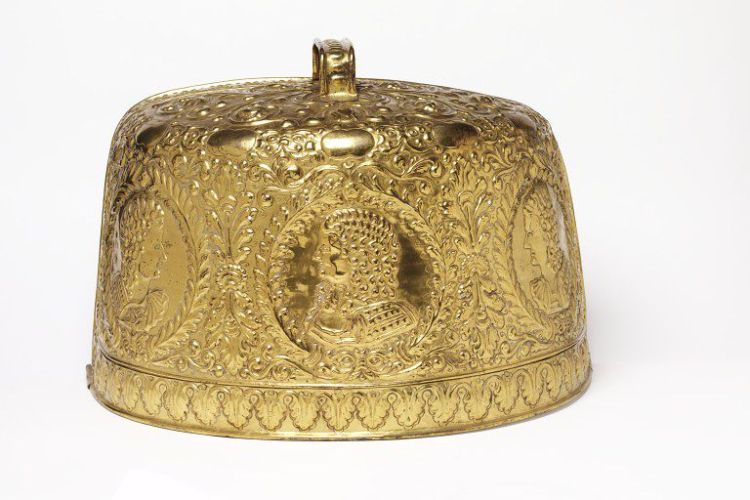 This curfew is a metal cover designed to enclose the embers of a fire at the end of the day. The curfew enabled the embers to be kept smouldering at night so that the fire could be re-lit easily the following morning with a puff of the bellows.
photograph and information: Victoria and Albert Museum, London